I love to ride the towpath near my home, just outside Stroud.
I’m much too young to use the roads; my mum says, “Not allowed!”
Instead, we talk about the birds and plants along the way
And wave to all the volunteers we meet from day to day.
Sometimes we stop and chatter to the friendly high-vis teams.
They answer all my questions; they know everything, it seems!
But one thing has been missing on our journeys into town.
My favourite boat, Augustus Gloop, was nowhere to be found.
One morning, though, was different; “No bikes today,” Mum said.
“We’ll have to wait around a bit,” and so we walked instead.
The day was cold and damp; my sister wore her snuggly hat.
My mum had brought hot chocolate – we were very glad of that!
We stopped alongside Wiggal’s Yard and through the fence I spied
A massive crane, a lorry and much busyness inside.
A man said, “That old dredger had so many parts to mend.”
I knew at once which one he meant; Augustus Gloop, my friend.
“She’s going back to work,” he said, “That crane will lift her in.”
We both looked up and waited for the lifting to begin.
The crane reached up into the sky; I couldn’t see the top.
I hoped the chains would hold and poor Augustus wouldn’t drop.
Then slowly, from behind the wall, I saw my friend appear.
But what a change there was! I hadn’t seen her since last year.
A brand new purple paint job and a vivid yellow boom.
A splash…not in the water, but of colour through the gloom.
A perfect, gentle touch-down. The chains were gone and then
My dredger friend was ready to start gorging gloop again.
Now, when my family and I are cycling down the track,
I smile inside, because I know Augustus Gloop is back. 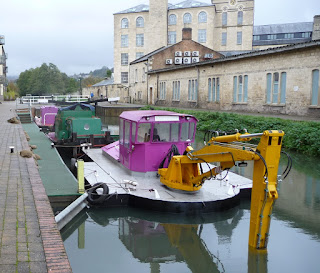 Inspired by two young children who had come along with their mum and spent a few hours, waiting patiently in the cold and rain to see Augustus Gloop being put back into the water. I found out later that they are regular users of the canal towpath and even at such a young age, show a great deal of interest in what the volunteers on their route are engaged in. Future volunteers, maybe?