I knew we should have brought the Nav' Lights!

Today, the Armada set off for Stanton's Bridge.  The voyage was initially in question due to fairly continuous snow on Sunday, but it was not too bad in the valley bottom to present a serious concern, so the trip was on. 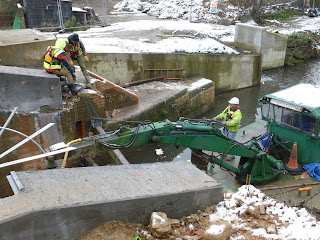 Firstly, the stop planks had to be extracted from Walbridge Lower Lock  entrance.  A tricky operation employing two land based volunteers assisted by Augustus.  Eight had to be teased out before we  could move forward. 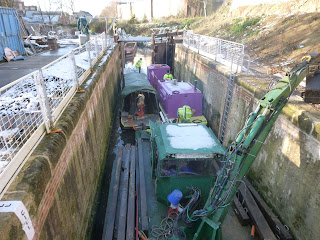 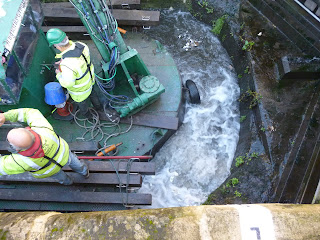 It was a tight fit in the lock but with the two work boats alongside each other the bottom gates could then be closed.  The mud barge, Weft, followed after the three work boats and was hand-balled in, as it was at Wallbridge Upper Lock.  The historic Armada then continued up the canal. 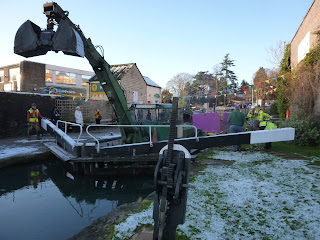 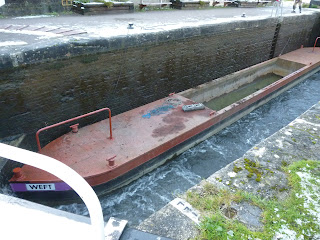 Weft rising in Wallbridge Upper Lock.  It makes a snug fit between the gates. 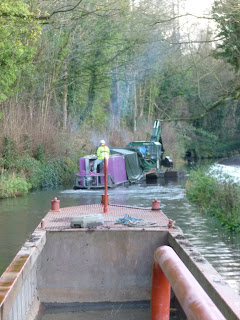 The canal was a bit tight for Augustus, up to the bridge at Dr. Newtons Way overbridge.  Wookey Hole propelling Weft was a considerable length, but was just able to make the tight turns around Capel's Mill. 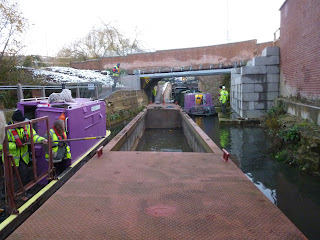 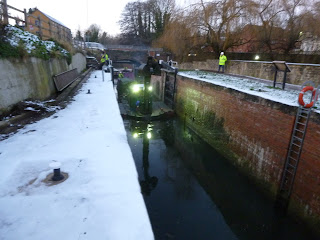 Arrival at Bowbridge was much like the HLF journey, in that, there was insufficient water in the pound above to progress any further.  So, the work boats were moored in the empty lock, whilst Weft sat outside tied to the scenery.  Unlike the HLF trip, we were now in fast fading light and plummeting temperatures.

It was an all action day making this trip.  All the volunteer crews and bystanders had an enjoyable and rewarding experience.