Ham Mill Update - Tues Dec 4th
by: Andy P.
Next day was clear and frosty but also magical with mist rising from the water. Our hands and feet still wished it was summer when we should have been doing this work. 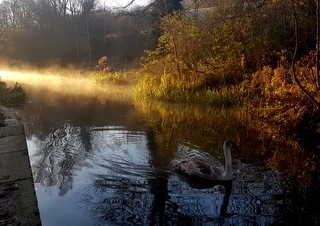 The big digger (BD) was brought in to play sitting behind the SBD, with the MD waiting in anticipation. The trench was dug out and a sophisticated level device used to ensure there was a fall away from the spill weir. 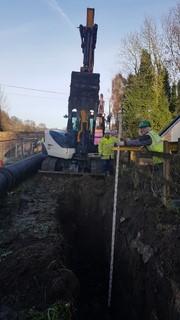 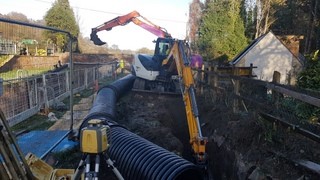 The soil lifted out by SBD was moved, patted, scraped and pushed into a neat pile by BD, to hopefully allow SBD to escape 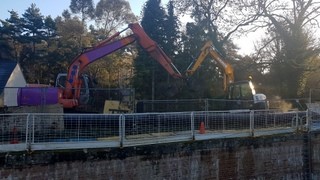 The trench hole was finished and passed as ok by designer John. Then the fun started. Carefully measured, cut ropes were fitted around the pipes and slowly, carefully and safely, the whole pipe length as one was lowered into the trench. Brilliant doesn’t really sum it up.


A bit of slight adjustment and it was in place-a perfect fit.


The 1 tonne trench box was next as it needed to go over the open end of the pipe.  A combination of metal chains and shackles were used to pass the swinging, wild beast from BD to SBD and into the hole.  Some gentle and delicate taps, then it was also in place. 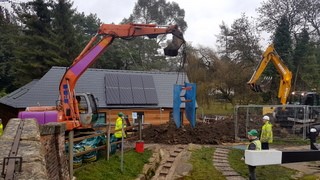 Then BD, SBD and MD all came to play as the trench was refilled in the failing light. We even managed to get the shuttering for the end sealing ring in place. Lots of cleaning, fence moving and erections took place! It was now really dark o clock. 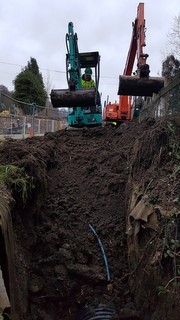 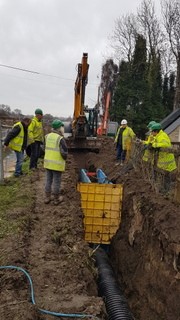 Big thanks to Bob, Duncan, Jason on the big toys, and the little helpers of Kay, Maurice, Mathew, John and Andy.
Posted by Peter Asquith at 12:26