Monday afternoon and  a plea from Western Depot to tow Wookie Hole from Ebley to Ryeford on Wednesday.  It’s outboard has packed up and it was needed to take materials and be a work platform for a new shelter they are making for the stop planks at Ryeford.  A last minute request for crew was met with enough enthusiasm for the job to be secured.

Wednesday morning we had the puzzle of how to hitch Wookie to Margaret.  This proved no bother whatsoever, they could have been made for each other. WD then turned up with all sorts of materials and tools that they needed for the job.  It was then a new combination that progressed down to Ryeford. 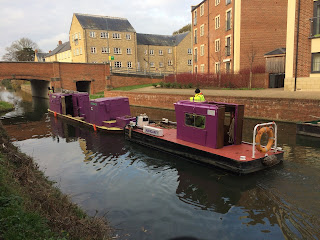 There was the usual melee of dredgers and hoppers next to Langley’s field, but this time with a difference.  This time it was Patricia temporarily blocking our passage. I t was nice to see it dredging away with no apparent effort.  It all looked pretty stable.  It’s really good news that it is working.

After that we quickly dropped Wookie off at her destination and set about the second task for the day, training on moving mud hoppers.  There was one almost completely filled with silt at the top end of the field.  So we connected it up, moved it two boat lengths East and moored it.  Margaret was then turned round and we reconnected it to the hopper and moved it two boat lengths West. After lunch we did it all again.  result was that one of our more experienced skippers Chris Godding has now gained his endorsement for towing hoppers with Margaret.  On the way home it was the turn of new trainee Malcolm Webb to show us his virtuosity in boat handling.

The good news with Weedie is that it has been doing a great job of chewing up the weeds in the Stanton’s bridge section that we started last week. Six full loads at least of the size in the picture in last week’s blog were taken out today. Also, we have a newly qualified skipper on Weedie in that David Pashby has gained his endorsement on this craft.

The bad news is that Weedie’s mesh has given in to the thrashing it has had in the last two weeks.  As completely expected for quite a while, once it was really put under load, like today, the brittle nature of the heavily UV affected plastic of the mesh has resulted in it starting to break apart.  A great rent has developed and it has rendered Weedie unusable. 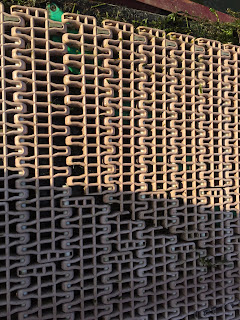 Knowing this was coming, we have already got a solution. We just need the money to pay for it.