The first team continued the edge boards at the Bowbridge ramp, a little distracted by the presence of BBC Radio Gloucester who were recording interviews for a feature on volunteering.  The wooden edge boards are now complete with only a few concrete edgings to install then we are ready for the aggregate. 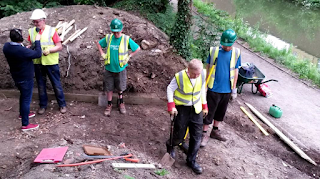 The second team set off up the valley from Bowbridge to do some much needed vegetation management. After the late spring everything seems to be growing with a vengeance but that section is now looking much more loved.

The third team headed over to Saul Junction to make some progress on workboat Flea.  There was but one objective: lift the flooring planks to get to the silt and water trapped under there. There were a few challenges but eventually the planks and the retaining bolts yielded and we were able to shovel out the silt and scoop out most of the water 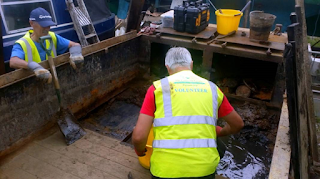 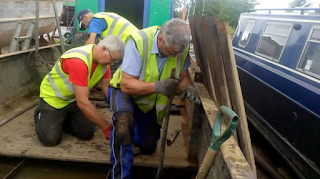 We knew some of the planks were rotten but it looks like we will be able to reuse most of the others. A good, if somewhat messy, day. 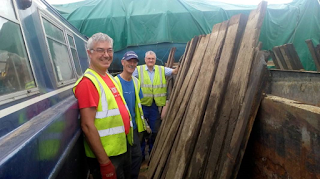