A chilly start for the gang of five as Bob set about transferring big dumper loads of soil up to the garden to fill in between all the plants, shrubs and trees.  The mini digger was a great help as it was able to push, lift and scrape the soil into place.  We still had lots of digging and raking to reach under the shrubbery and to the fence edge. 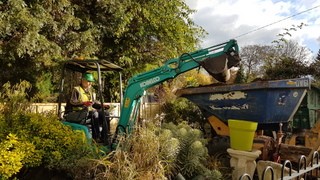 Even the sun came out for a while 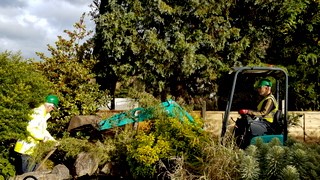 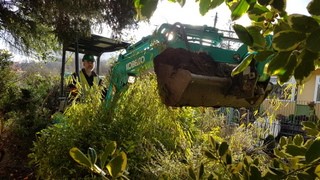 Some very large nice stones were too heavy to move, so were made into features as a plan B.  Frank and team were clearing the lock of weeds and a lovely job they made.  Good to share biscuits with them.

One main rule on site was to keep the gate closed as Dino, the big fearsome dog, might get off its chain and escape, to cause canal mayhem.


We followed it down the tow path, with pedestrians and animals taking cover.  A few shouts and it started to walk back.  Spotting a small path and preferring this option, off it went.  It’s a clever dog as it waited repeatedly until getting within striking distance, than running off.  It was a nice walk through the glades, river side, industrial estate and units.  Thought we had it trapped but it had disappeared.  He was spotted, sat on another path peering at us, waiting calmly until we reached it and then set off again.  Irritating.  Did not know dogs could hold so much pee for marking purposes.
It reached the tow path and took a right turn towards home-good news-then turned round and headed away.  Running around to meet it,  Dino had stopped to pester a man with a poodle.  Leaping on its back and with an arm around its neck its collar was found.  Then, clinging on for dear life, we were dragged into the path of worried neighbours holding a proper lead.  It was a piece of cake after that, being taken for a walk home.

Dino, the Alsatian and Rottweiler cross guard dog who can un clip itself from its chain 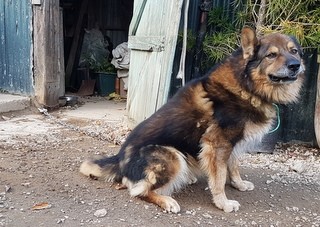 It’s a big softy-really
Posted by Peter Asquith at 17:12