Our white board list now has 3 items wiped off.  The block wall was completed and the steps are getting nearer the road.  3 tree limbs were felled, chopped and added to the growing pile of materials we were collecting.  The remaining limb, being the only upright part, was left and does look much better.


We started to fill in the blocks with concrete, 1 bucket at a time, filling 6 blocks per big cement mix.  We did try to work out how many mixes but it became depressing so we ignored those thoughts. 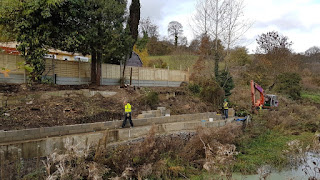 The biggish digger roared into life and set about trying to find garden soil with no weeds, no silt and no nasties in it.  Yes, well creative logic was used and 3 very full dumper loads were moved up towards the garden.  A ramp was also made to allow the digger to get as close as possible to the bank to help our aching backs in anticipation of in filling the slope.


Will and Ray returned with a nice handmade gate to block off access by the bridge parapet-just need a post to finish it off and more fencing.


Having agreed to dismantle the garden fence we were able to carefully drive the dumper to the edge of the landslip, to tip its load.  We had to move a large number of very heavy garden ornaments, to gain access.  Now there’s a surprise.  The mini digger pushed as much soil forward as practical. 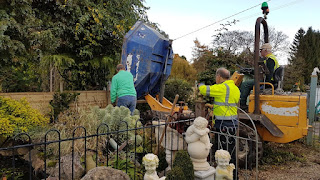