Despite the cold, 8 people arrived at various times, Bob, Duncan, Mathew, Jason, Kay, Richard, Maurice and Andy.  A job list was prepared on the white board. F irst was oiling, greasing and fueling the diggers and so pleased to see the mini digger back-easily pleased we are sometimes.  BD brought into place to lift out the trench box for the last time and lay it peacefully on its side awaiting collection.  It served us well. 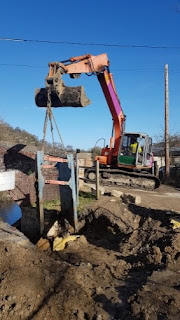 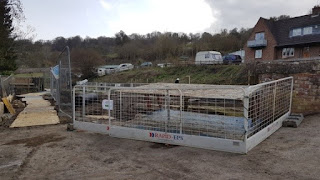 Then infilling and some severe ground tamping to force the muddy stuff back together.

Back into the trench after pumping out the water.  More brick cutting, more digging, more mud.  It’s horrible. Stucking mud came to mind. 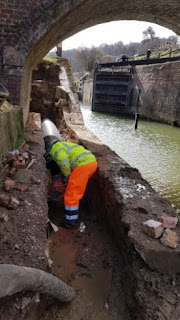 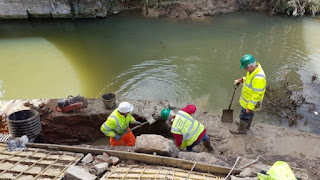 The water pump was moved into place onto the new dam and following a spring clean to remove the odd muddy bits, it was fired up and spent the rest of the day moving water over the dam. 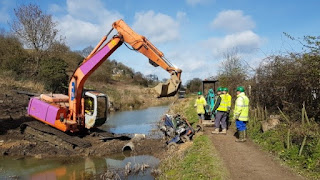 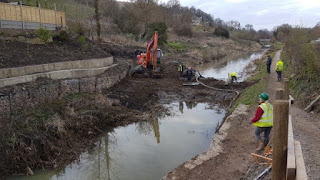 Another causeway is being built to allow MD to get to the fallen wall and go footings exploring.

Dave C and Buffers arrived with fuel (thank you) and we joined them on a Brimscombe trip to bring back some of the hollow blocks for their 3rd visit to site.
Reg bought a box of grease tubes and some more fuel (thank you as well) and we gossiped a while over a cup of tea.  A pleasant 10 minutes before his chair broke.
Another small length of pipe was fitted and then the last bend.  Those joints fiercely resisting to the bitter end despite MD and sledge hammers just ‘pushing the pipes together’. Exhausting.  The brickwork into the canal was cut and brick by brick it is being dismantled.  Also exhausting. 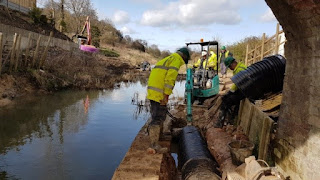 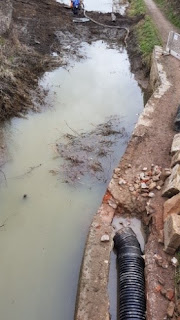