After an unspectacular weeks work, on Saturday the Boat Team undertook an entirely different activity. This was to support the Community Engagement Team of Cotswold Canals Connected. The idea for us was to bring a tug and hopper to the public event at Ebley, do some demonstrations and assist in the hopper pulling. This is a variation of the very popular barge pulling that Paul Weller has run many times at Ryeford locks, particularly for local schools. The strong wind presented a few challenges. In the end we modified our plans to pull a Margaret and hopper combo along the wharf outside Kitsch In. This turned out to be very successful and we did at least 6 tug/hopper pulls with the public. Emily and Molly from the Community Engagement Team were very good at drumming up members of the public to have a go. Kids loved it of course but quite a few adults had a go as well, amazed at the little effort it took to get well over 20 tonnes of metal moving on the water. We had Margaret running with a crew member ready on the controls, in case the wind should get things out of hand, but it wasn’t needed.

Thanks to Nick, John Sirett and Rachel for turning up on a very inauspicious day. Chris Godding and Malcolm Webb came to see us, and it was really nice to see Bob Poole and Peter Snelson as well. A few other volunteers came from other parts of the Trust as well.

The journey back was another matter. We were now into wind. Straight off the bollard the still strong wind took the bow of the hopper, nearly 100 feet away from the propeller, and took it onto the far bank. Any boater will tell you what it is like getting off a bank on the lee of the wind. It took us about four attempts. As we went through the flood gates the public gave us a round of applause, recognising the difficulty of the task. Then all the way back to Ryeford to drop the hopper off, the wind kept trying to blow the bow onto the bank but the team skilfully managed to keep it in the middle. We all learned about boating from that. Great boat handling on a nasty day. But a very satisfying day. 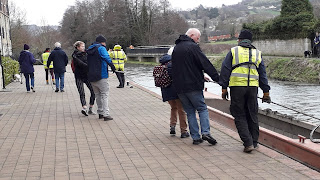 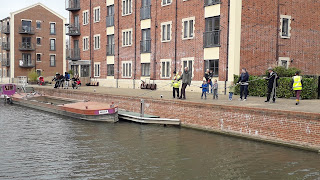 Thanks to Sam Sirett for the pictures.
Posted by Peter Asquith at 18:29