The reconstruction of Weymoor Bridge over the T&S
by: Tim C.


Weymoor Bridge over the Thames and Severn Canal near Latton was demolished during the Great Depression in the 1930s under a job creation project sponsored by GCC.  This bridge provided access to Latton Basin on the North Wilts Canal which connected with the T&S close by the bridge. The North Wilts then connected to Swindon and the Wilts and Berks Canal.


The original bridge abutments were presumed lost until uncovered by our keen volunteers some ten or so years ago and work over the past five years has involved designing and rebuilding using the uncovered abutments with substantial input from the WRG. 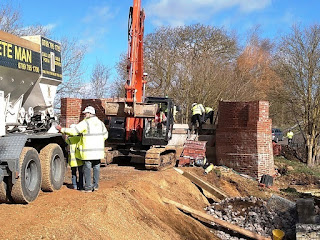 Saturday 9th March 2019 was a milestone in construction progress of this Eastern End project with the casting of the saddle over the arch using fibre reinforced concrete.  An excavator was used to deliver the 4m3 approx of concrete which was then positioned by volunteer effort. 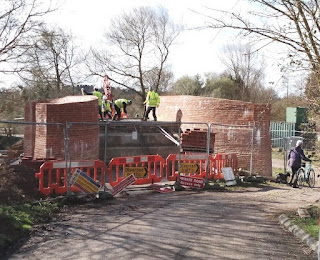 Much work remains to be done including the gabions and retaining embankment on the west side adjacent the River Churn (also over which the canal has to be carried), reconstruction of the approach roads, removal of the temporary causeway across the canal and restoration of the canal channel. 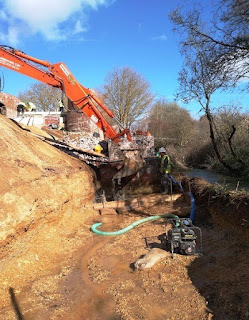