A Little Bit of History Perhaps

Samson was on its way down from Ham Mill to Harper’s Field.  Since discovering what we believed was a narrow but deep channel through what we call the gas main, we have wanted to see how far we could get a tug up East.  After the dredging that was done last year we thought we should be able to get right up to the sewer at Wallbridge.  So, the offer was made to pick up Samson from there last Friday.  In preparation for what was going to be a long journey, we moved Margaret above Dudbridge Lower on the previous Wednesday.

On the morning the boat was prepared, locks were set, people met and briefed. Then the adventure began. The first anticipated hazard was just out of Foundry lock where silt is known to collect. Well sure enough, just level with the weir Margaret stated to hit the silt bottom.  She slithered about in a most inelegant way, but we actually managed progress, with David expertly finding the channel at not much above tick over. Then came the gas main, where I took over, heart in mouth we approached. You could cut the tension in the boat with a knife. The bow was over what we knew was the worst. Would the skeg get caught, No, she was through. A cheer went up, in the boat and on the bank. 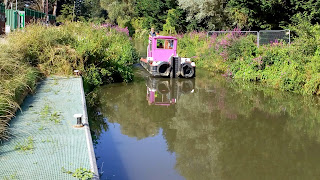 Margaret through the Gas Main.

Chestnut Lane and just beyond proved to be the biggest challenge so far. More revs were needed as we went through the bridge, but still doable. As we went passed the slipway there was still a lot of slithering about. We had been worried about this section. Before the Dredgers came the water available here was no more than a few inches. But we made it into slightly deeper water. Now came Lodgemore Bridge and we could see journey’s end. But it was not to be. In the middle of the bridge hole Margaret came to a grinding halt. We tried again, same result. We tried once more with more revs and a run up but no. We did not attempt a flat out approach, as we thought we’d end up perched on a pile of gravel, unable to move and unable to lower the bridge. But what a great result. Well done to the Dredgers for getting us that far. This section was never meant to be dredged to full depth or width as it was a means to an end to get to Stanton’s Bridge. And just how do you dredge under a bridge that is so low, busy with traffic and takes 10 minutes to raise and 15 minutes to lower. The amazing thing is that we found just enough width to be able to turn Margaret around. Relatively quickly we bow hauled Samson through the bridge. We would now tow Samson until we could get behind her. 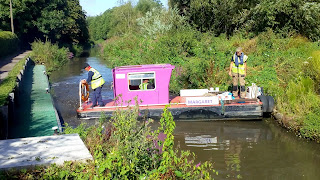 At this point I had to go to hospital for an no canal related problem, so I had to miss the best bit. We discussed and briefed how it would be achieved before I left. Towing a barge is a fraught process. There is a risk that the barge under momentum would hit a stationary tug. I returned about an hour later to find Samson already descending Dudbridge lock. Wow! Well done crew. There had been the odd drama where the whole issue had got stuck but we get that all the time in other stretches.

At this point, it started to rain, but thankfully soon passed. One of the big worries was that the forecast was for more heavy rain and strong winds. But it stayed warm and sunny all afternoon. With that and the fact that the previous night’s heavy rain, the weather gods were smiling on us.

The rest of the journey was now a known quantity. Ian, Jo and Chris S. left us at this point, having completed their mission to get us that far. Using Margaret to push Samson is an interesting exercise as you can’t see over the cabin and have to rely on hand signals from a crew member up front. So it is a credit to the crew that we got all the way to Harpers field with hardly  a scrape down the sides. 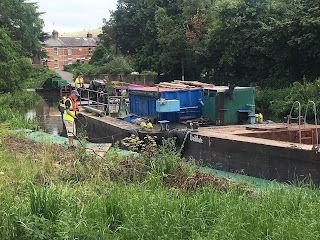 We moored Samson up, returned Margaret to Ebley where just as we were mooring the wind started to really pick up. Good job that didn’t start any earlier. And we obviously debriefed in the Crown. 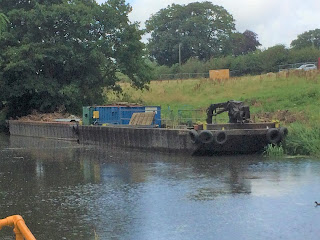 A most satisfying day. Total time on route about 6 hours. The weather proved to be completely in our favour. The previous night’s heavy rain ensured the canal was at full level all the way through the 4 pounds we travelled, and yet we enjoyed sunshine and light winds until the very end. I would not want to attempt the journey above Foundry Lock in anything less than full depth. Special thanks to Ian, Joe, Chris S, David L, Chris D, Jerry and Dave I. A most professional job all round.
Posted by Peter Asquith at 07:39