We had a somewhat disjointed morning because it was container moving day. This is the beginning of our withdrawal from the Wallbridge Lower lock site and which meant that all the stuff that lives in the container was temporarily clogging up our "garage". 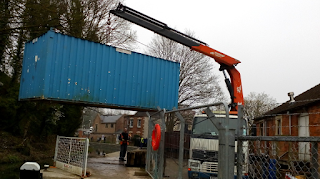 However, once that was sorted we had a productive day tackling various odd jobs such as the drain in the yard, some concreting over at Brewery Wall and forking over the lock side silt for about the millionth time ready for grass seed. 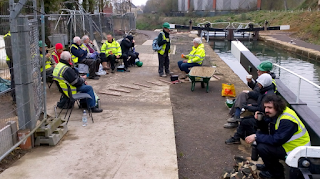 After lunch the container was given a good spring clean.  We'll be sending the doormat to Bristol University's Impossible Science department to see if they can determine how one humble mat can hold an infinite amount of dust.We also had a small team at Harper's Field, Ryeford doing some fencing with Steve P and an even smaller team at Dock Lock doing a bit of surveying with John B.