Hot on the heels of last weekend’s visit from Newbury Working Party Group the SDC Tuesday volunteers headed down to Dock Lock near Eastington yesterday.  Sometimes canal restoration comes down to just fetching and carrying and this was an excellent example.  The main challenge was to shift a large pile of heavy clay soil from lock side to a temporary site down at Meadow Mill using only wheelbarrows, shovels, mattocks and good humour. 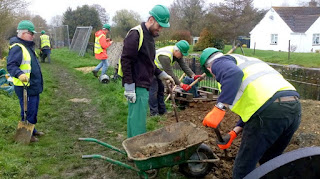 It was a drizzly day which added to the weight, clogged up the wheels  and reduced the grip underfoot.  Luckily we still had enough energy left for a hands-in-the-air team pic. 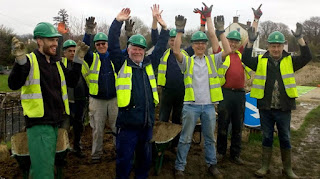 As a final task we shifted four 6 metre lengths of pipe down to the site, four people to each pipe. The pipes will be installed under the towpath to take the water from the new spill weir down beyond the tail of the lock.

We just about had enough energy for another pic but only sitting down. 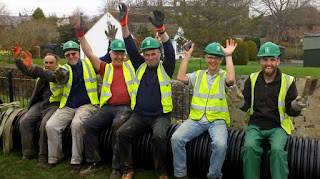