Digging out for the Griffin Lock lower landing stage


The landing stages team has been working in parallel in two groups this last week or so.  The stage will be close to a high bank, needing steel plates to retain the bank and towpath.  One sub-team has been at Brimscombe doing the hard work of manhandling the plates for buzzing off rust, bitumastic painting, and drilling for lifting points.  They were brought to site along the track from Ham Mill by trailer, to join the OBB piles already in place nearby.


The steel bank support plates will be used two-high at the higher end of the bank and screwed to the rear of the bank-side piles, then back-filled and tamped solid with soil.  Steps up from the stage at the lock end will be formed within a sturdy piled steel box, inserted into the canal bed.


The other sub-team has made good progress with the HIAB crane and clamshell grab, digging out an especially wide and deep stretch of ground.  Thursday started with some ice breaking to avoid making barge-hauling even more energetic. 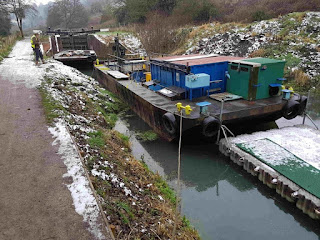 The width of the canal means that the barge has to be pushed diagonally across with each load, for the crane to reach high on the opposite bank where spoil is deposited. 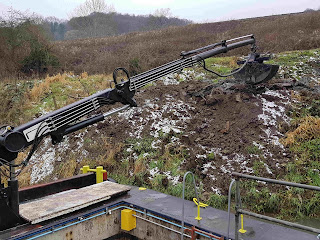 Then hauled back again to let the crane get a good grabfull on a short reach.  It’s often too hard to hold by hand, and needs anchoring to the bank. 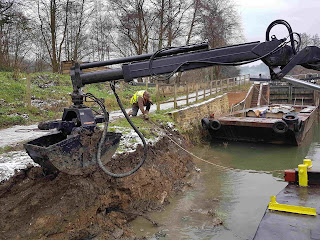 The first pass was nearly completed, to just below water level, leaving about 1m width in place.  This will be removed in a second pass to about 10cm above water, with piles and backplates being installed as we go, to ensure the bank stays intact. 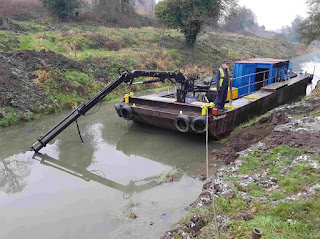 The grab gets a wash, the crane driver a well-earned break.  A handy piece of kit, in the right hands.
Posted by Peter Asquith at 10:51