Ham Mill Update - Mon Jan 14th 2019
by:Andy P.
Duncan started to repair the broken garden wall and we (Bob, Maurice, Mathew, Richard, Andy) all went into the garden to move the shed back a few feet. Dangerous.  Gravel moved up to the back of the shed, plants and pots moved out of the way, shed emptied again and mini digger gently pushed the shed back.  Lots of levelling to get it finished.
More plants donated to the bank.  More trees and plants were dug up and moved to the bank.  More trees were taken out of pots and planted in the garden.  Mill stones moved.  2 horses repositioned.  Washing machine moved. Caravan moved and levelled.  More soil found and put into the holes left by the moved trees.  Washing line is now accessible.  We are a helpful bunch and the neighbours are very pleased.  Even Dino seemed content.
A new home has been agreed for the 17 very heavy stop blanks.  About as far away as possible of course.  Tried a 3 or 4 man carry but gave that one up in favour of hauling them on the dumper and using Bobs supreme driving ability he got them as close as possible.  The numerous fence posts appeared, along with a dingy, were all neatly stack and covered.  Created room for 3 more cars now. 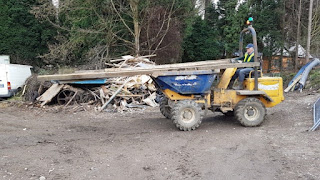 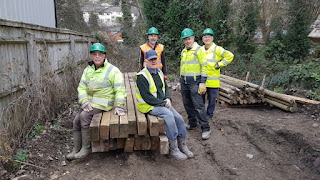 Dave and Les arrived with the screw piles and hydraulic machine.  More seriously heavy stuff but a home was found.  They also took another tipper load of metal away-thank you.
Cleared the area behind the bypass fence to keep the other neighbours happy.
A plan and route has been agreed with John P. who, with his team, will re-install the towpath along the canal side when the final bypass pipes are installed.  So a last job for the mini digger was to start to make a pathway to follow the fence lines
A good mixed up day and the tree stump had its last day off. 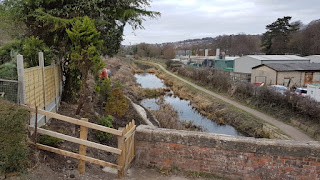