On Monday there were 6 of us and weds we started with 3, until 2 snow bound folks slid their way to join us. Dedicated bunch.


A slow start as no mini digger and we had to wait until Jeff brought us the hired jack hammer.


Work continued to undermine the tree root, along the temporary tow path, with more axing and cutting until it finally relented, to join the yard wood pile.  Once out of the way we could make progress.  The path was dug out, levelled in a sloping sort of way, until we were happy.  Some suitable long posts were found and installed with the help of the digger and the borrowed post basher.  Trees roots still caused serious mischief.  The wire fence was tensioned and fitted back in place. Reg, in his own car, made an emergency delivery of nails and 2 man post basher.  More posts were fitted on the canal side and recycled boards, for both sides, were cut, shaped and fitted.  Membrane laid and type 1, via the dumper, digger, barrow, rake and shovel completed the job.  It had its first customer walking down it as we left. 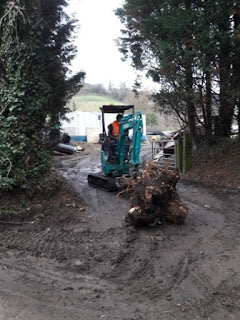 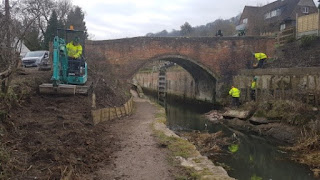 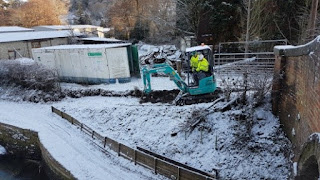 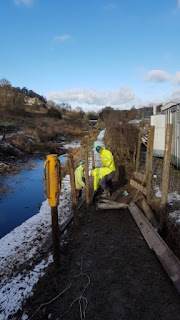 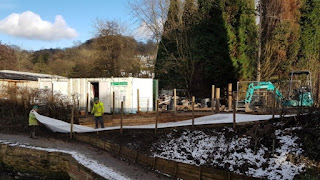 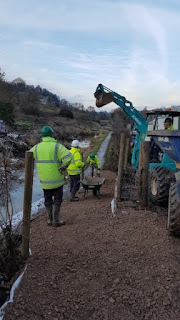 Work started on breaking up the collapsed wall. Considering its age it was mighty hard to break up. The mud glue, vice gripped the bricks and boots. Exhausting shift working and we almost have another walk way across the canal. 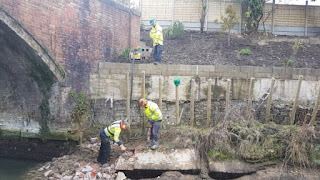 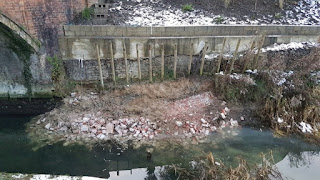 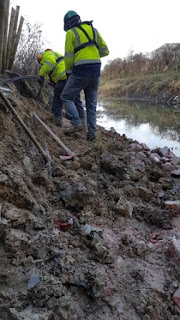 A cold few days and some serious R and R needed. A pair of mandarin ducks did seem at home enjoying life, as we left.
Posted by Peter Asquith at 15:57