Monday saw Wookey and Margaret out as usual. A nice touch was that the two crews combined to put the stop planks away in their new shelter at Ryeford locks. Apparently they needed every bit of muscle the team could muster as they were very (not the word they used) heavy. 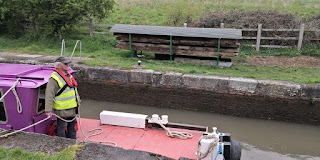 As well as this Margaret moved three mud hoppers, perhaps a record actually. And then for good measure they took a trip to the Ocean. This was in spite of having to do battle with a huge length of cloth that had got round the prop. 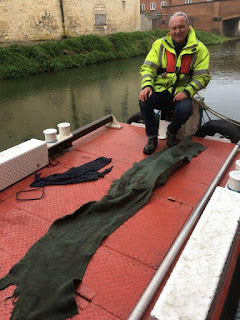 For my part, Dave and myself spent most of the day in meetings which were very productive. Some quite big changes are in the air for the Boat Team. Eventually around three o’ clock we were let out to play. This took the part of joining up with a team from WD, which had two objectives. First to launch Stuart at Strachans Close and second, to get Chestnut Lane Bridge working. Both were achieved with minimal fuss, resulting in Weedie now being west of Chestnut Lane Bridge and Stuart in the water at Strachans Close. Dave and I then went for a shakedown cruise, but first we had an important job to do. A few days previous Ken Burgin had presented us with evidence that seemed to suggest that there may be a narrow channel up to 1.3 metres deep running through the gas main area. Nonsense I had originally thought, but then reflected that I had not actually measured it. Now was a good time to do so. The results were quite astounding. Basically, there is a channel through the gas main about 1.2 metres average depth and approaching 3 metres wide. This means that we can get our deepest draft boats through here without any great problem. This totally changes the possibilities for travel right up to the sewer just before Wallbridge Lower, which alas, I can confirm gives a depth of just over half a metre. Extremely satisfied with our results we went for a very pleasant cruise up to the Painswick Brook. I am happy to say Stuart has proven to be a very nice craft to skipper. 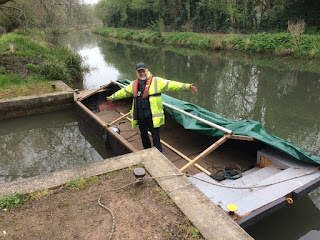 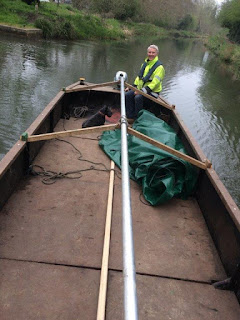 Wednesday saw Weedie travel down through Dudbridge Locks, overseen by Ian Moody. They went on to have a good day extracting weed at the Ocean, taking out two full loads.

Tony and myself, helped by Ian Moody, took Stuart up to Wallbridge to help clean the lock gates. As we were getting Stuart ready we met Steve Pickover and Iain Tweedie, who were going to spray a load of hogweed that day. Iain said the rest of the Wookey crew were around Upper Mills clearing banks. We handed the boat over to Frank and his team and generally helped where we could. The Lock Maintenance Team soon had the gates and the wing walls free of growth, most of it seemed to be all over the boat. What have you done to our lovely new boat! Oh well, it is a work boat. 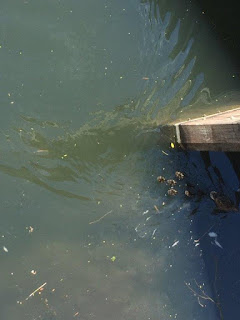 At this point we received an emergency via Wallbridge. A mother duck and ducklings were trapped in Bowbridge Lock. So as the team were tidying up, Roy and myself went to investigate. Sure enough, mother and ducklings were in the lock which was empty with the gates shut. How on earth had they got themselves there. No idea, but the problem was soon solved by opening the gate and letting them out. First ducklings I’ve seen this year. When we got back to Wallbridge, everything was packed away and Stuart had been cleaned up. A job well done.

Margaret was out with Jenny as skipper. They pushed Warp to the Ocean and back, and helped Weedie with weed clearance at the Ocean while they were there. They report they all had an enjoyable day, in particular a very pleasant lunch at the Ocean, which is one of the more beautiful spots on our canal.