Latest from the Boat Team

Here is this week’s account of Boat Team activities for the last week. As I said last week, it has become difficult for me to keep abreast of everything that goes on. But I’ve had a few notes from other people this week to help, so here goes.

Monday. I started off with Stuart, which was going to Dudbridge to help clear the fish pass there. Dave was particularly pleased with the new spill kits that have just been obtained for all our boats. I left there with a shopping list from Dave on all the little items we needed for the two new work punts. After visiting Homebase and B&Q,  I then went to Western Depot, mainly to pick up two signs to be put up at Chestnut Lane bridge.  I did speak to a despondent john Sirett, who was very frustrated by the current technical problems on Patricia.  He just wants to get on and shift mud.  Unfortunately, when I got to Chestnut Lane, the signs did not fit.  Basically they needed cutting before fitting, so back to Western Depot, but not enough time to do the work that day.  I bumped into John again, who was much more upbeat, possibly having discovered the problems with Patricia.

Tony and David had what appears to be a challenging but rewarding day, with the strong Easterly winds blowing at the time. Tony says ‘Decided it would be inadvisable to take a hopper down to the Ocean with the exposed waters down there so headed East.  Above the locks it was still pretty breezy but, after a crew conference, the temptation of an idle half loaded hopper was irresistible.  Under the somewhat apprehensive gaze of the dredging crew we made a virtually seamless link up and were away for Ebley.  Reaching Clothmills Bridge we would have liked to go further but prudence prevailed, for with the wind whipping between the buildings as it does along Ebley wharf we tied in the bridge hole to change ends.  David had great fun winding ‘Goliath’ and getting blown all over the cut, you can make the elements work to your advantage but on the other hand get it wrong and life can get a little  exciting! (but all part of the training?)’  The return was just as challenging.  Tony goes on to say ‘An old Captain of mine would remark on the frisson of uncertainty when coping with adverse circumstances would be adequately balanced by the deep satisfaction when everything worked out right. Today was definitely  one of those days!’

Wookey continued with reed clearance West of Upper Mills Bridge.  It’s amazing how this boat crawls its way up and down the cut, gradually eating into the gargantuan task of keeping the banks clear.

Wednesday, I was determined to spend the day with the Wookey crew.  That was a revelation.  Richard has a hernia or something, but you wouldn’t know it watching him drag reeds from the canal.  Iain knows who the boss is.  Judith of course, who is no feeble girl I can assure you.  Her greatest satisfaction is to get as big a single lump of reed from the canal as possible.  A two kebber makes her very happy.  During the course of the day, we temporarily lost the new outboard.  Colin and Dave came to pick it up to take it away for its 20 hour service. It should be back in about a week. 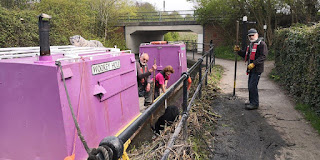 Later on, I was with the Weedie crew in the pub.  They had had a good day, clearing weed from Boakes Drive to Stonehouse Court, taking out a good couple of loads.  The beautiful aspect in this area was enriched by new born lambs in the field next to the canal. The Weedie crew were quite moved by it.  They even sent me a photo. 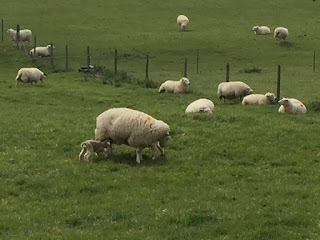 Chris King sent me a note saying he had a brilliant training day with Tony, Goliath and Warp. They took Warp right up to Dudbridge breasted up.  Tony said a barge had not been breasted up as far as there before.  They apparently didn’t even go aground, not until they tried to turn around at Dudbridge Wharf. Debris of a chair back and bike saddle were removed from behind the flood gates at Ebley (sigh). They then returned, this time pushing Warp ahead. 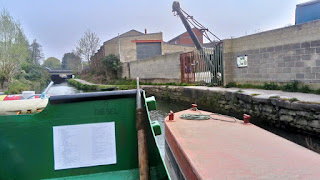 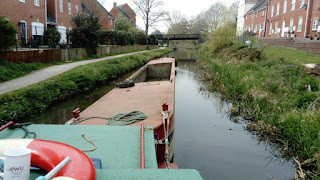 Tony makes a couple of interesting observations about moving on the river section, along with the shallow water there. All Boat Team skippers and crew may wish to note. I draw from Tony’s own words.

1) When proceedings against the flow in the river section of our navigation one is tending to push water ahead and it gives one some additional depth but, when returning with the flow one tends to reduce depth under the hull which inhibits progress.  In this latter situation only proceeding at very low speed mitigates this effect.
2) The feeling of both myself and Chris was that one has just as good control of ones tow breasted up as pushing, and connecting up alongside is easier and safer.

Margaret and Warp made serene progress to the ocean and back. Good to see Steve back after a lengthy lay off.

Thanks to all who contributed words and pictures