Bob, Duncan, Maurice, Mathew and Andy set about finishing the bits of jobs left.
Dug or rather hacked the dried concrete mud from behind the wall and replaced with ‘top soil’ hand dug out from behind the new bungalow wall.  Looking much nicer now and ready for some grass seed.  Will and Ray arrived with 3 rails, whilst the post was being installed.  Another job completed.  Thank you. 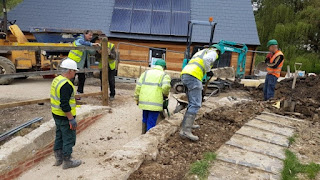 The new temporary tow path was levelled and boards moved over in a nice sweeping pattern and to allow room for the permanent path to be re-laid when John P’s team can fit it in. 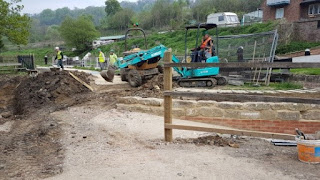 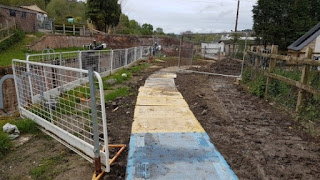 A mini digger bucket width was dug out along the length of the bungalow non supporting wall so this can be replaced with something more suitable.  Then it rained and within minutes the concrete mud turned to evil gloop.  We don’t like that.  The muddy mess being left piled up as back fill for when that job has been completed.

We also started to tidy up the lower wall which had been exposed but ran out of bricks and suitably sized coping stones-shame as might have finished that job as well.  Therefore, without any ceremony the tow path reopened whilst we blew our own trumpets...…. 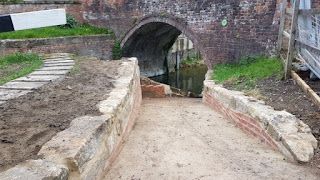 Our residence diesel fixer arrived to mend the diesel generator leak.  Steve P arrived with a magic potion to go into the BD fuel system to help stop the diesel bug which seems to plague the fuel and has caused numerous blockages. Interesting fact and maintenance thought of the day.

All types of stored fuel can deteriorate over time and stays in a usable state under normal storage conditions for up to 12 months. After that the fuel begins to age and deteriorate as it reacts with oxygen from the air.  When it does, sediments and gums collect which can be sucked through the fuel lines and clog filters.


Water is the single biggest contaminant for fuel.  Most water in fuel tanks is as a result of condensation when the tanks heat up during the day and cool at night. The presence of water in the fuel tank can create the ideal conditions for bacteria and fungi to grow.  The combination of water, food (fuel) and the typical UK temperatures can mean a ‘diesel bug’ or ‘fuel bug’ can rapidly spread.


Once they become established the fuel quality can quickly deteriorate.  The microorganisms can multiply quickly, creating a film on the surface of the fuel and leaving diesel bugs, sludge and damaged engines in their wake.
That’s it for Ham Mill now as we are still waiting a decision for the collapsed wall.  After all its 4 years since work started and 15 months since we returned. So what’s a few more months or years whilst we wait and we move on to the next job and pastures new.
Posted by Peter Asquith at 16:55