A gang of Dave C, Mathew, Maurice, Kay, Jason, Andy P assembled at the depot and discussed the plans for the day. Some considerable time later we set off in a range of vehicles.
The mini digger had already been left by John P who was also going to bring the repaired wacker plate for us. Jason began digging out a small trench 1 m deep down towards the canal, for the water pipe along with a services duct. Andy J arrived with the red van full of pipes and other materials for future use. This was all stacked into the empty, apart from 1 stanley knife, storage unit. Another crew with Frank, Colin and Maurice, arrived with more pipe. We then went off to collect the water and duct pipes, after several depot vehicle changes. 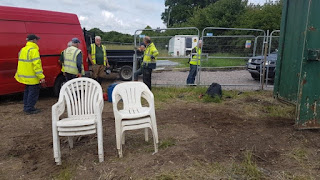 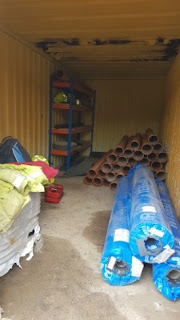 We managed to get into the very nice on site amenity vehicle, but with a large wasp nest inside, we decided outside was better, until the nest was dealt with in a kind and caring manner. However heavy lunch time rain helped to regain our confidence and a very nice it was too inside. 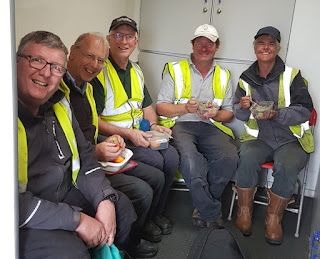 Jason’s trench was slow going, as the small bucket would not empty as the sticky clay would not release from the bucket. After several metres the ground was stonier and so things speeded up, until a very large concrete pad stopped play for the day-as well as the rain. 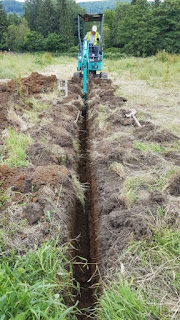 The water pipe was laid in the bottom of the trench and we unwound the ducting which somehow twisted itself into so many tangles we had to spend a lot of time trying to straighten it. The draw cord inside managed to snap. Ooops. Numerous discussions took place before a D ring was tied and fed through the pipe to solve the problem. 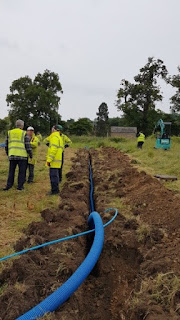 The trench was refilled and we probably got 2/3 of the way down the field.


It was now raining a lot, so we packed up and drove the mitsi and digger out of the field onto the new whacked type 1 surface. Well actually it took 40 mins of trying different angles, speeds and trench plates before unloading the digger, so the 4 wheel drive vehicle could get unstuck and get out of the mud.


NOTE-keep out of the field if it’s wet.