The fine weather assists in the visibility of many other jobs going on.  Here's a round up of the catch today:

Wood sales continue to flourish.  The regular truck load of wood arrived, followed by the inevitable splitting process.  Two bays of the magnificent wood pile are now fully stocked to the rafters.  All this contributes nicely to our funds.  Like the books, it's a valuable bread and butter income. 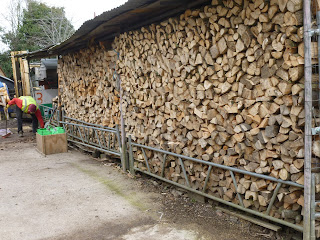 Our 'Carnival' welfare unit was a hive of activity.  Real progress with the wiring was evident, it is really taking shape.  The ceiling now sports several led strip lights.  Along the side wall sits a fine roll of lino floor covering waiting to be laid. 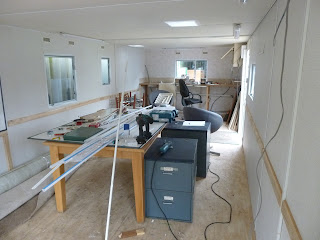 Out in the yard, a strimmer received a service, work boat Mole was having the hook system for the cover installed.  A new bespoke cover will keep the craft dry when not in use.

Later in the afternoon John Attwooll of Attwools Manufacturing visited our new work boat Mole. John is designing the boat covers to keep both Mole and her sister Ratty dry when not being worked. John spent nearly an hour with volunteers Jill and John taking detailed measurements of the hull and the support frame work to enable his company to design and manufacture the first cover in time for Mole to be formally given her proper name in April.


Anyone who has been involved in ship manufacture will know that all ships of the same design have variations in the way they are completed.  With this in mind the cover for Ratty will not be started until she has been brought ashore and re-measured against the cover for Mole. Ratty will also be given her proper name in April.


A trailer, the sides of which were mostly well rotted ply wood, has now been stripped down ready for the frame to receive some attention before re-panelling. 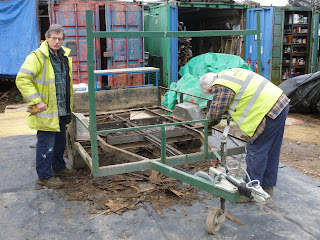 One of the maintenance tasks carried out by WD volunteers is known as 'swinging the ocean'.  This involves opening and closing the swing bridge over the canal at the Stonehouse Ocean. This is done nominally once per fortnight to ensure the bridge operating gear is kept in good working order.  Today was one of those days when two volunteers were despatched after a gap of five weeks of very cold weather.  A full report with pictures to follow next time the bridge is swung.

Finally, your TC member (Fundraising), appeared with a home baked cake for the lads & lasses in celebration of her significant and upcoming birthday this weekend.  It was well received by all and of course, totally demolished by end of play. 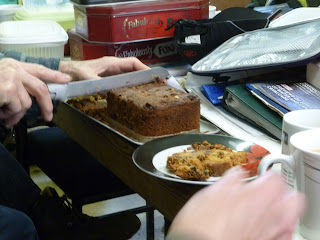