by: Ian Moody
The SDC Volunteers continued the fence work at Brewery Wall, an interesting challenge given that nothing on that site is quite straight or true (especially the recycled fencing) so we've decided it will be "canal straight". The lower ledge is ready for concrete and next week we have a visiting group from Nationwide Building Society pencilled in for that task. Roger did a grand job on painting the windows and window recesses. 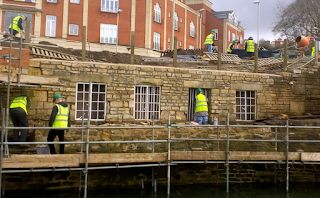 Meanwhile, over at Wallbridge Lower lock, a crack team of hole diggers cracked on with, um, digging holes on the upper reaches of the offside. Maybe they've gone crazy or maybe they're just preparing the ground for the big tree planting session. We have 109 saplings kindly supplied by The Woodland Trust all ready to go so all we need now is a keen group of school kids to plant them. Watch this space... 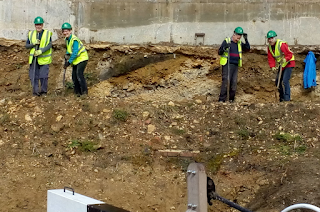 And as if all that wasn't enough we had a bloke called Jon constructing shuttering for the upper steps on the towpath side and two blokes called Paul using the tug Goliath to haul mud barge Delilah back down to Ryeford for her emotional reunion with mud barge Samson.  They don't say much but they obviously belong together. 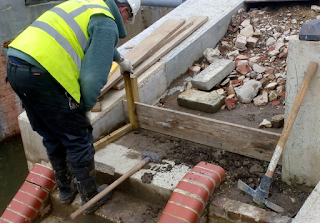