Much of our work this autumn/winter has been at Fords Wharf, Ryeford, about 80m long, where the towpath was narrow and very uneven, and erosion had taken much of the material below the coping stones, to the extent that some were falling into the canal.  Nothing but a fresh start was needed, so all the coping stones were taken off with our HIAB crane, set by the side and many of them pressure-washed. 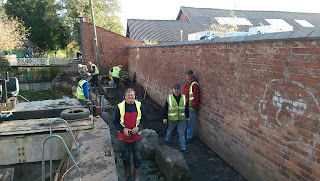 To stabilise the bank we pushed in interlocking galvanised sheet steel piles 4m long, about 60cm further out to widen the towpath.  With our ¼ ton piling hammer and 100Psi air pressure, some piles still took 20 minutes or more to go down.  Every second pile was tied back with steel threaded rod back to angle irons, and then the whole assembly filled with 36m3 of concrete.  This was done by pumping from the road above, starting at the far end and removing sections of pipe one by one as the work drew nearer the top.


The job of replacing coping stones could then begin, each selected for depth, using most of a mixer-load of cement and a combination of crane and sling, levers and general persuasion.  The level of the edge is slightly higher than before, so behind the stones was a void about 25cm deep which is backfilled with brick rubble, then Type 1 aggregate, with brick pavers set in a bed of sharp sand, and compacted down.  We took the opportunity to pave below the bridge wing wall and under the bridge, probably the first time this has ever been done at Ryeford.  The bridge brickwork needed some TLC so we cut out the old mortar and repointed. 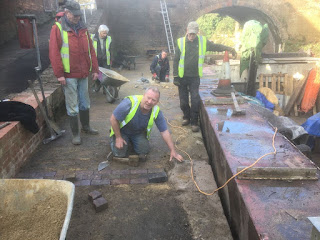 Finishing up in February and March involves resetting coping stones and paving near the swing bridge, and repairing the steep bank nearby where old piles were encroaching the offside.  The team will move on to build two new landing stages at Harpers Field, and then on to Ebley, and Lodgemore. 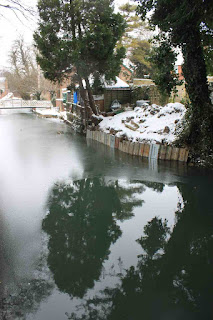