Subject: Goughs Orchard with a hint of Ham Mill

Monday at Goughs was to fit a partially underwater man hole chamber and lid for the main shut off valve which feeds from the mill pond to the canal.  Much fine cutting and testing up to Bobs armpits and we had a working system.  Good to see the flag pole is still intact. 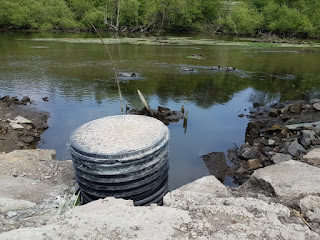 A quick look at Ham Mill to see lots of weeds but not much other progress. However we did have a rescue on our hands.  Sparing no time myself and Bob climbed down into the top part of the lock, where the above ankle water made quick progress into the below ankle safety boots. 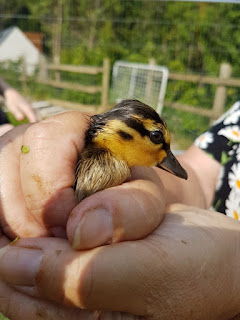 7 very small ducks had fallen over the stop planks and mother was not happy. The keystone cops chased the little uns around and around and up and down and in and out of the overflows and under and out of the gates. For a few days old they can move.  One by one we caught 5 of the 7 and gave them their first flying lesson into the lock below where mother greeted then and swam off. 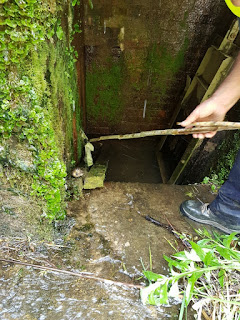 Pulling all the weeds up located no. 6 and off it went paddling like mad to catch up. No.7 appeared under the gates and after a good run around was soon in hand to be taken the rest, which by now were near the bridge.

No.6, now on its own, was helped along by another female who flew in to the rescue and led the ducking towards the rest.  After a while this female flew off and landed where the others were gathered.  Slowly over the next 15 mins, they all swam back and eventually found No.6 sulking in the reeds. Much hugging and cheering ensued from the gathered crowd.  Ahhhh. 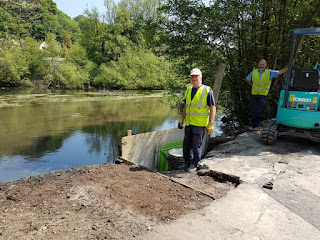 On Wednesday we moved lots of stones with the digger, made the shuttering for the 5t concrete and cut back all the shrubbery from the side of the road to help with car parking.  Concrete arrived and started to fill the hole, until the shuttering became a curve then several sided as it slowly split.  Oh dear. Dumped the other half on the road and hand shovelled it into place carefully. Nice job in the end. 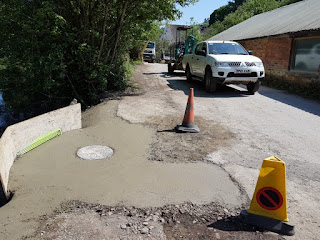