Jasper, one of the new work punts was received by the Tug Team today. It was to have been launched at Bowbridge but the lorry transporting it was too large to get to the place we thought we could launch it, and where it is actually needed. This was a bit disappointing all round, but after considerable deliberation, the landing stage next to Chestnut Lane bridge offered an alternative. 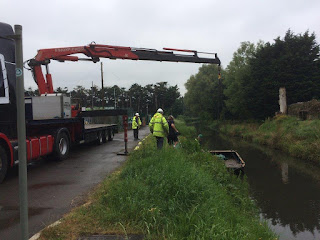 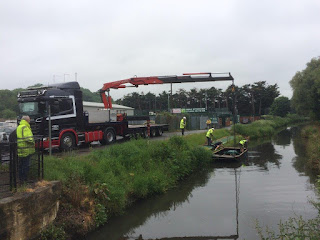 Once in the water, Buffer gave us a thorough briefing on some of its features, particularly the outboard and the very snazzy cover that has been provided with it. With a cheery wave he left us to it. 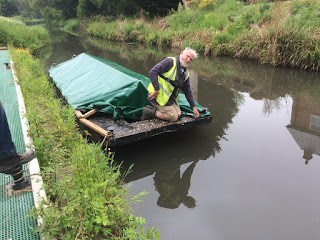 Then David Pashby set off for Wallbridge, only to come to a halt about a few minutes later, presented with Samson blocking the cut, with the Landing Stage crew working at Lodgemoor bridge. An earnest discussion between the two parties decided that it was nearly lunch time, so they would move Samson to a wider bit of canal for us. Mike Hewett wanted to find a place where the trip boat could pass, and we could be a guide. Two or three attempts were taken before we managed to squeeze through between the bank and the barge. 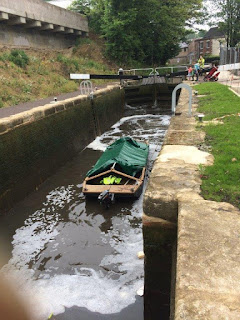 Going up Lower Wallbridge lock was fun, I must say the gates and the gear all operate very sweetly, at least David said so, he did all the work. Here we met the SDC crew, working on clearing the surrounding site, and took a moment to reflect on how different it all was compared to about a year ago. I remember when it looked like the problems around this lock looked insurmountable. Then it was up through Upper Wallbridge, and put it to bed next to the Lock Keepers Café.

I was pleasantly surprised how the boat handled for a flat bottomed punt, but did swear a lot at the outboard, but that is what they are for isn’t it.  It is a simple craft, but well designed and sturdily built. I reckon that Jasper and its stable mate, Stuart, will prove to be very valuable and versatile craft. 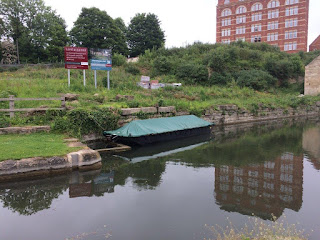