Persistent rain , sometimes lashing down, made for another very steamy day at WD.  It was noted that the act of printing a document resulted in the paper steaming as it emerged from the printer! 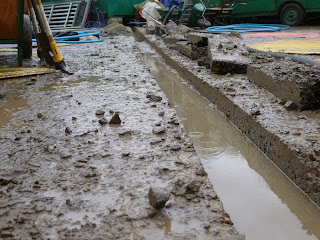 Out in the yard, a team continued with the service trench to the new welfare caravan.  Quite a messy operation.

1 armoured cable and 1 blue water pipe and another blue pipe for the phone line were pushed with great effort into another only just big enough pipe to feed supplies to the new rest room. 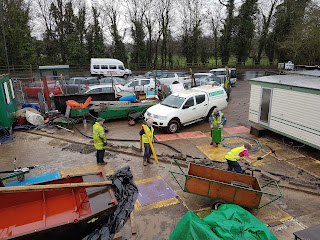 The concrete was superbly cut and today we removed the tarmac and kango'd underneath to a depth to allow the pipes to be laid along with another blue pipe for any future cables.

The trench was back filled and the tarmac pieces carefully and accurately replaced. 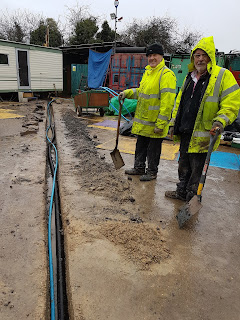 Work continued on Patricia.  Finally, the last pin was removed from the leg mechanisms.  All the steel work can now be prepared for painting.  The seals in the hydraulic cylinders will need replacing.  With seized pins, the lateral stresses have destroyed the existing ones.  We'll get a quote for this job shortly.

Once the rain ceased, a tarpaulin was erected over the front of the craft.  We reckon that there is sludge in the front bilge, tea in the second, under the accommodation cabin, antifreeze in the engine bilge and mostly water in the rear bilge.  The main ambition is to get the bilges dry ready for cleaning and a repaint. 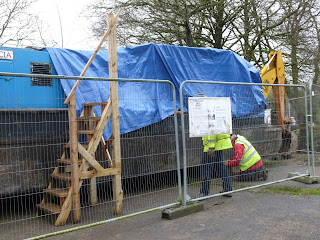