Today, we were on a hat trick with regards to meeting three important milestones.

Firstly, we'd never seen the prop' turn, mainly due to not fully deciphering exactly which combination of switches made it work.  Some bodges had been applied to the controls in the past.  These were removed and once the engine was running and there was hydraulic pressures in the system, we had it tuning in both directions. 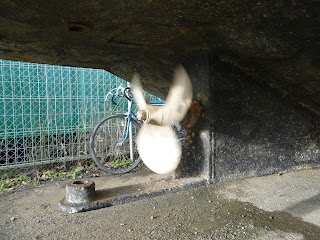 Secondly, the rudder control, which runs on its own closed loop hydraulic system did not function. Once the various bleed and filler points had been persuaded to work, we acquired the correct hydraulic fluid and filled the reservoir.  In short, we managed to purge the air and had it fully functioning.  This was great news, since an earlier conversation with the manufacturers suggested that the seals would be shot and we'd have to have it repaired or replaced for about £1000. 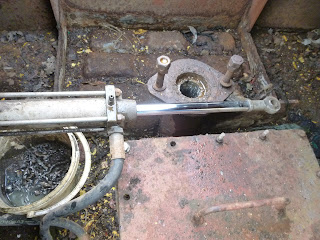 Finally, those completely grunged up bottom cylinder pins, which we expected to be a nightmare to shift, yielded relatively easily, Probably protected by fresh supplies of leaking hydraulic fluid from the rams.  So far 2 of the 4 have been extracted.  All the cylinders will go away for a complete recon'. 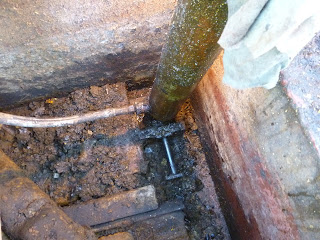 So, in all, a pleasing day and great progress.