The Project is now rudderless!

On investigation, so much of the rudder shaft system was so seized, that a course of action which concluded in it being cut off was taken.  Various attempts with gas/heat and heavy hammers had no influence at all, so it was decided to apply the large cutting disc.  Whilst this all sounds a bit extreme, the components can easily be fettled and refitted. 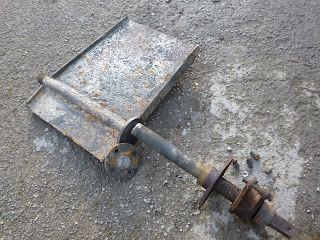 Leg pin removal activity continued, we are getting quite slick at this task. The third set of leg beams, starboard side, front, were removed and sent off to the workshop.  Access to the port side of the craft is too tight for the staging, so we're going to need to get some bespoke construction in place to facilitate safe access. 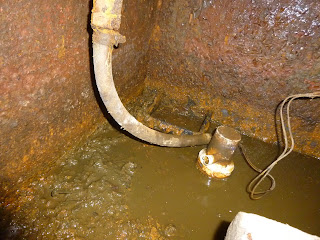 With a bit of time to spare before heading home and a quick look at one of the four bilge pumps, with easy access, all of which sound like run, but no water ever appears.  The one shown above was sat in a thick bed of clay and had clearly not been serviced in a long time.  We have a new set of automatic pumps to replace them, as manual control may not always be around. for a quite a long period.