The final hydraulic ram for repair was removed this morning and taken away for assessment and quotation.  The other two rams on the jib are fine and can be left.

We removed the bucket from the jib, which involved extracting the 4 pins which held it there.  All, for once, cooperated and were taken out in half and hour or so.  It is planned to have a clam shell bucket available for use as an option. 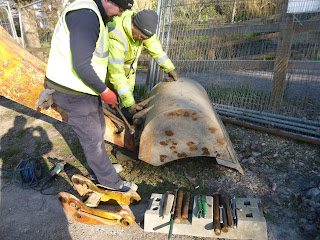 Having not been too impressed with an initial quote to shot blast and paint the leg components, we gathered them together in the Transit and delivered them to a company close by in Stonehouse, which will hopefully give us a much better deal. 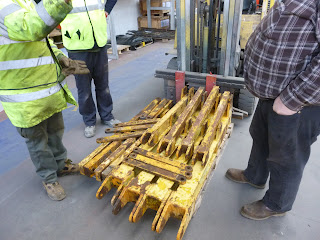 As a final occupation this afternoon, yet more sludge was removed from the stern bilges.  The advantage, today, was that the water component had turned solid and was considerably easier to keep on the shovel!