The SDC led Tuesday volunteers are putting the finishing touches to Wallbridge lower lock and its surrounds. The towpath is largely complete and attention is now focussed on the off bank which does require some TLC.  A few coping stones need fixing in their final places by the lower gates and the lockside needs the topping layers applied other heavy work.  The bulk materials need to be transferred to the offside which is now only accessible via the lock gate.  The solution has been found in the shape of one of CCT’s river barges, Delilah. 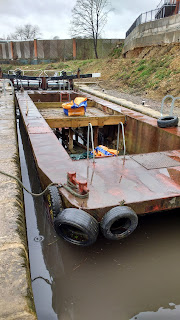 She is shown here in the lock which was full when this picture was taken.  The SDC volunteers will construct a temporary pathway across the centre raised platform to allow them to bring bulk materials to the off bank safely as well as all the tools required. 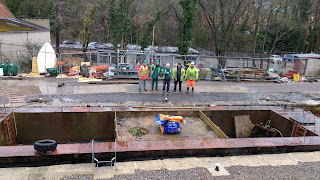 Delilah was lying below Ryeford locks and was towed by our tug Goliath as far as Chestnut Lane swing bridge.  This is as close as the tug can get to Wallbridge as she cannot pass over the gas main laid on the bottom of the Stroudwater at this point. It fell to the small band of volunteers to bow haul the barge through Chestnut Lane and Lodgemore bridges and through the narrow dredged channel between Lodgemore and Wallbridge into the lock.  All this accomplished in today’s inclement weather and adverse wind.