As you may have read previously, barge Delilah was pushed by our tug Goliath from Ryeford to Chestnut Lane on Tuesday. Goliath had to stop at this point, as a gas main below water level is currently too shallow to allow her to go further. Here's a picture from the tug of the handover to the crew who then manually hauled her to Wallbridge. 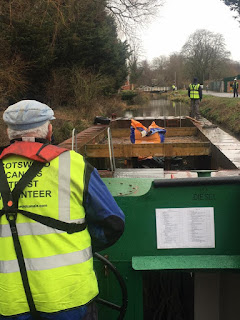 What the previous blog doesn’t mention is that this was Goliath's first work outing since a major engine rebuild over Christmas and New Year.

Those of you who know Goliath may have been aware of ever increasing amounts of smoke over the previous few months.  In December, the decision was made to remove and disassemble the engine to see what was causing the problem.  We found the engine was well worn (it was built in 1968!) but otherwise in great condition.  Over the holiday period, the usual suspects were sourced and replaced - valves, valve stems, piston rings, bearings & gaskets.  Other parts like diesel injectors and pumps were fine.  The rebuild was completed late January and the engine replaced early February.  Trial running shows great improvement, with normal running essentially smoke-free.

We’re looking forward to lowering of the gas main at Chestnut Bridge, so Goliath can work past this temporary obstacle, and to many years service in the future.  We pass on our grateful thanks to all those involved in the rebuild.

If you're interested in learning more about tug operations, and perhaps training to drive her, please contact Dave & Myron at Dave.Irving@CotswoldCanals.com & Myron@Hamshill.co.uk.