The SDC volunteers had another cracking day at Wallbridge Lower Lock yesterday. 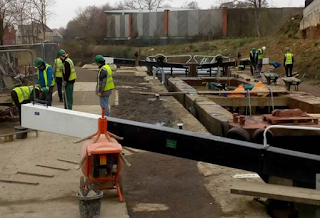 The path on the offside of the lock is now complete and the brick quadrant is done.

On the towpath side the concrete capping beam has been extended and further down the site the volunteers worked alongside our regular visitors from The Apperley Centre in Stonehouse [ http://www.shrubberiesschool.co.uk/ ] to haunch the outside edges of the new towpath with soil, ready for the green, green grass of spring.

We also had a small group planting a hedge alongside the towpath near Ham Mill and in the afternoon we began the concreting work at Brewery Wall. All in all it was a very productive day. 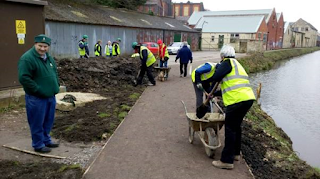 The work taking place at Wallbridge lower yesterday was finishing touches . And landscaping. The lock side offside was having a top coat dressing to give a firm footing to walk on. John Pontefract was completing a section of concrete capping and the towpath edge was being built up and graded with soil ready for grass seed hopefully leaving a nice edge.  One more job on going was the finishing of the tread / walkways for the gates. 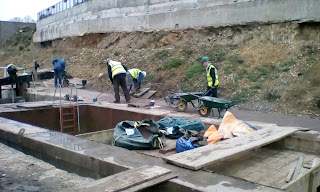 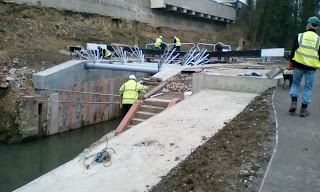