Thursday, and the task was to do some towpath repairs at Ebley to eliminate those pesky puddles. However, our usual methods did not seem to be working. As we all know, we live in a hard water area but this was something new. The water was so hard it defied all efforts to sweep it out of the way with the broom - it's almost as if there was some temperature-related effect happening. Not to be deterred we went at it with hand tools, confident that we could remove the offending stuff in large, friendly pieces but it was not to be. The main effect was to fill our boots with very small and somewhat cold shards of ice. In the meantime, the away team were reporting that their shovels were just bouncing off the pile of topping material that they were attempting to load onto the tipper. This was not going well. 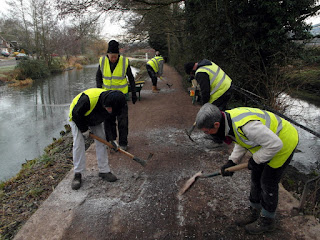 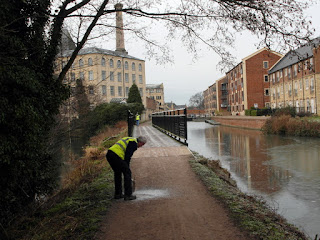 We regrouped and brainstormed. The absolute best idea was to abandon ship and reconvene in the nice warm coffee shop. The second-best idea was to try spreading some salt on the puddles. This idea was so good that I immediately and inaccurately claimed the credit for it. A quick sprinkle later and we were back in business. It turns out that ice plus salt equals water. What a discovery!!!  We'll be communicating our revolutionary findings to the scientific community.

Meanwhile the away team had managed to mine their way into the softer middle of the aggregate pile using only brute force and persistence. At this point we were joined by staff and pupils from Thomas Keble school, eager to get stuck in. Soon we had an advance salting party and whole bunch of brushers, barrowers and levellers following in their wake. And thus, after an unpromising start, we found a way to get the job jobbed.

Finally, spare a thought for the swans who briefly entertained us by landing on the thin ice, which then gave way leaving them sitting there for a while wondering why they could not paddle forwards. They worked their way through eventually but if they are going to do much more ice breaking they seriously need to redesign their prow. 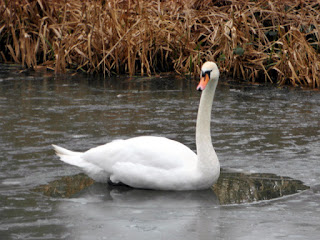