Weedie gets a new conveyor mesh.

Wednesday morning first thing.  I am at the depot looking for a vehicle and some help to load it. ‘Use the tipper’ says Buffer, ‘I’ll give you a hand’ says Peter, taking a few minutes off from the dredger.  Loaded I say to Buffer a few minutes later. ‘Good, Dave will take it down in a few minutes, do you want some help unloading’ says Buffer.  ‘Too right’ says I. At this point Richard A and Steve C got roped in.  A few minutes later we met up with Nick and Rob at Stonehouse Court who had already got Weedie perfectly placed on the landing stage.  The six of us made very short work of getting everything in place. The tipper and its crew then went off to do more vitally important stuff. Thanks Western Depot.

In the mean time a crew was taking Goliath out from Ebley.  A very new crew were taking first tentative steps on their own on the big bad canal.  I’d already found out from Iain that the Wookey would busy themselves around Harper’s Field and even without an engine and wouldn’t need any assistance.  Great, time to get on with the job in hand but not before admiring the wonderful setting around this area.  This has to be one of the greatest spots on the whole canal network. 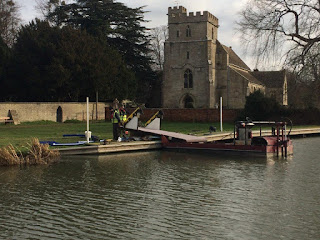 The next bit broke my heart. We have been nursing the old mesh very tenderly for a good while. Now hacksaws and chisels soon ripped it apart.  No time to dwell though.  Cable ties secured the first new section of mesh to the old. 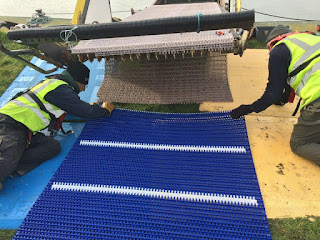 The hydraulic power on Weedie was then used to drag the new mesh into the bowels of the conveyor structure.  About a metre or so at a time the new mesh was added and pulled onto the craft.  Old sections were dismembered as they came off.  Very quickly the new mesh appeared at the other end of the conveyor. 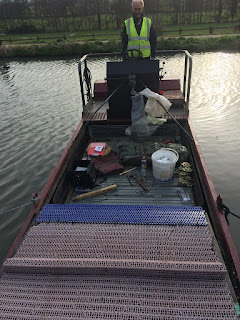 Next was the first tricky bit.  This was to disassemble the idler shaft so we could put the new sprockets on.  It resisted our efforts for an hour or so, but a combination of heat and an impact driver got it apart.  Re-assembly did not take long.  Power was again used to pull the new mesh onto the conveyor until all was new, none was old. 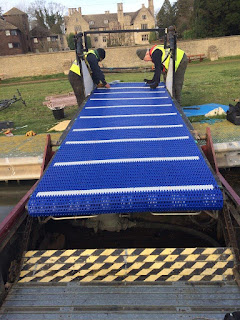 That was it for the day.  Literally tie the loose ends up, pack up and go home.

Thursday saw a change of crew.  We were now joined by Brian and John.  The task for today was to set up the drive roller at the front and make all the final checks and adjustments.  Here we had things go our way. A short while ago we had struggled with umpteen years of corrosion around this area, putting on a new drive motor for the drive roller.  This time round it all came apart in our hands. 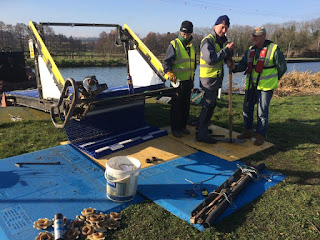 The whole issue was re-assembled quite quickly. 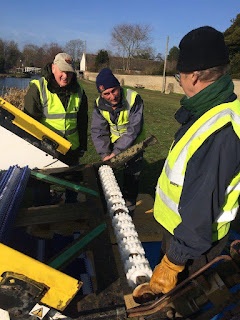