Luckily, there's meant to be - but it is new.

You may recall that we recently hauled her all the way back to Griffin Mill Lock.  This was so she could be near her sister (brother ???) barge, Samson and that's because Samson (and the piling team, of course) have what it takes to help do her conversion.
Here's what her deck looked light this morning. Pretty clear, apart from a battery and bilge pump (we knew we'd need them) and a few tools. 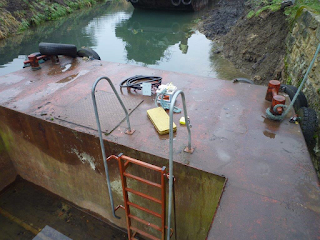 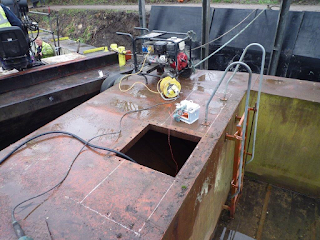 The next bit took a while ... but now we have a much bigger hole. The ladder has moved, too, and will later need fixing in a new position.  By now the pump had done its job, taking water levels down from about 18 inches to 3 - so it had been moved and started work removing the rain and snow melt from the main hold. 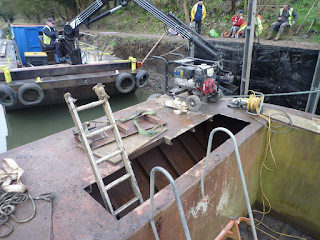 Folks aren't meant to clamber over our vessels: we try to discourage them, but we're sure they do. We'd hate someone to fall in, so after tidying up the edges, we put a temporary cover over the hole. 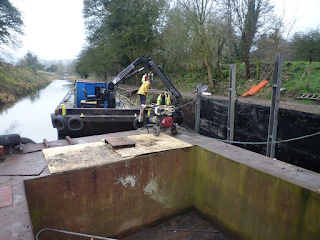 Next task is to put edging round the hole, to stop rain dribbling in, and to provide extra strength (although judging from today, it seemed to have plenty already!).

Why are we making holes, you may ask? For a crane in Delilah, Delilah, a crane.
The crane is already in WD, and is progressing well. There's still lots to do before the crane & Delilah meet. If you'd like to help, Dave & Myron would be interested in hearing from you: email dave(dot)irving(at)cotswoldcanals(dot)com and/or Myron(at)hamshill(dot)co(dot)uk  <anti spam...ed>
Finally, don't forget to look at the background: the piling team are making great progress on the landing stage below Griffin Mill Lock.