Ham Mill 11th and 13th Feb – The Trench Gets Ever Deeper
by: Matthew J.


This week the trench digging got serious with the return of the Slightly Bigger Digger (SBD). Actually it wasn’t the previous 8 ton digger but its slightly smaller cousin, the 5 ton Very Slightly Bigger Digger (VSBD). First job of the day was to uncover the trench box protecting the end of the bypass pipe that we had laid before Christmas. The bad news was that a fair bit of water had accumulated in the end of the pipe due to the rain over the last couple of months, so that when we removed the end plug it all gushed out and left us with a gloopy mess in the bottom of the trench. 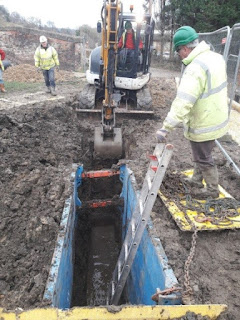 The VSBD then set to work extending the trench back towards the bridge so that we could lay the next 6m length of pipe. Unfortunately the stickiness of the mud meant that the digger bucket regularly required mechanical assistance to empty it out, resulting in a strange mating ritual between the VSBD and the mini-digger. 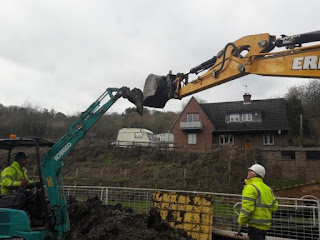 The depth of the trench by this point was such that extreme care had to be taken, but the job was eventually done and by Monday evening the new section of pipe was in place with a wooden marker to show where it ended. 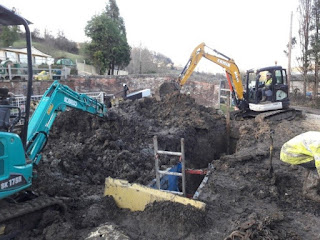 Finally the trench could be back-filled, enabling the team to exercise their creative skills by simulating a World War 1 battlefield. The end result was satisfyingly realistic. 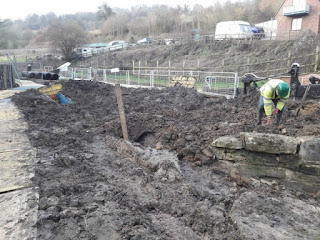 On arriving back on Wednesday morning, a slightly reduced team faced the challenge of extracting the trench box from its previous resting place, so that it could be moved over the new pipe end. Unfortunately the VSBD proved to be unequal to the task, so the two halves of the box had to be lifted out separately. 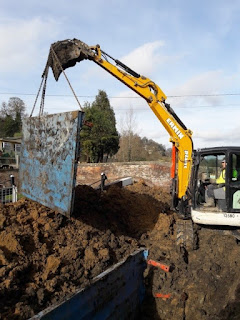 The rest of the day was spent in extending the trench to meet up with the previously-dug section going down the sloping towpath. The pipe has to negotiate a 45 degree turn at this point, and this is also where it is effectively at its deepest, so the final excavation was of epic proportions. The trench box was then reassembled and slid into place over the pipe end. Further manual excavation will be required to allow the final sections to be put in place, but that will have to wait for next week’s thrilling instalment….. 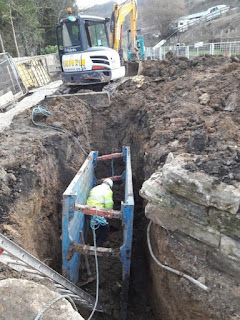 With thanks to Bob, Duncan, Richard, Matthew, Jason and Kay.
Posted by Peter Asquith at 13:28