T for Training (and Tuesday)

The Wet dredging team decided some time ago that Tuesdays would be good for training days. We soon discovered that in the words from the Michael Jackson song “You are not alone.”

This week, two, crew and an Instructor gathered at Ryeford for a “session.”
Since the dry boys had used our previous work area, we carefully manoeuvred Patricia backwards to a new patch towards Ryeford Lock. To make life interesting, we had a mud hopper attached alongside, (“breasted up” in Narrowboat parlance.)
Now, we knew that the trip boat team were having a training day and would arrive about 11:30 (we get calls from them asking if all is ok.)  Of course we always agree a plan.
It was a bit of a surprise when Goliath the Tug and crew turned up just after we lowered Pat’s legs down!  They decided to “play” with a full hopper but got it firmly wedged between OUR hopper and the bank.
So, it’s 11:30 as they began to free it,  and?
Here’s Percy! 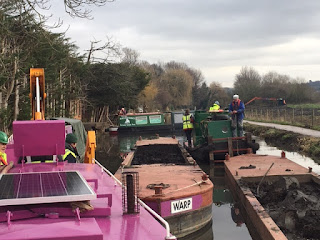 Bob M and his crew happily pirouetted on a deep, freshly dredged bit before waiting to go down through Ryeford Lock.  After assisting them passed our hopper, we eventually had to yield, lift the legs and move over a few inches to allow Goliath to pass through.

Later still, after unavoidably putting water into the hopper, we have developed a technique of helping remove the water by using our bucket, starting in the closed position!  Even with the holes drilled by Peter A and Vince H, we can still remove about 100 litres each move (it’s a 150 litre bucket).