I'm sure that those of you paying full attention to the blog recall that a long time ago, Delilah went upstream, eventually making it all the way through Griffin Mill Lock.  Well, the good times have to end eventually, so she's been on the move and at work again.

A couple of weeks ago, a few sturdy lads (well, Workboat Team volunteers) set to in an attempt to bow-haul her downstream again.  But she wouldn't move: not stubbornness, but too much rainwater in her hold.  A quick trip to collect the 2" pump, a quick soaking of a couple of volunteers later, quite a lot of pumping, and she's floating again.  Attach ropes, and away we go.  Slowly, of course. Through Griffin Mill, through Bowbridge, and a joyous meeting with workpunt Stuart.  Cutting a long and interesting story short, it turns out a 2.3 HP outboard can tow Delilah, but gosh is it slow; and difficult to turn; and impossible to stop ... Luckily those sturdy lads were still holding the ropes and could keep everything under control.

Eventually we reached her new destination – in the cut behind Jewsons, above Wallbridge and below Dr Newton's Way.  She was to be used as a work platform as an overhanging willow was felled, so we left her to meet her new friends.


Re-visiting her after the tree had been felled ... wow, what a lot of tree you can get in a wide-beam barge: that was unexpected!  And isn't it interesting how much lower in the water she sits ...
But, not daunted, she had a new destination – through Wallbridge locks, meet with tug Margaret, and down through Dudbridge en-route to Harper's Field.  But you'll have read about the fallen willow tree above Dudbridge Lock, so no tug coming upstream to meet her, and so we're bow-hauling again. 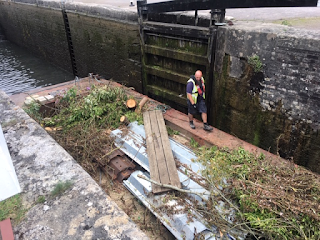 Having gone through the Wallbridge locks with just a small problem of clearing debris behind the gate, there was a new challenge: with her new found added depth, it turns out she doesn't want to go very far. 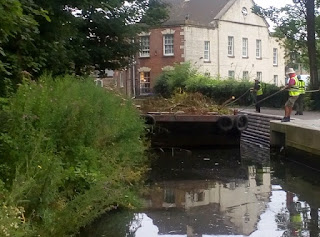 She was 'encouraged' over the silt banks, under bridges, through the narrows, by lots of hard work. 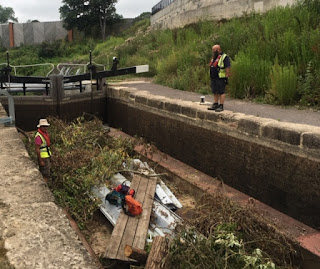 Plus, when she got really stuck, and while keeping careful watch on the upstream pounds, flushing a few locks-full of water downstream to help her over particularly difficult stretches. 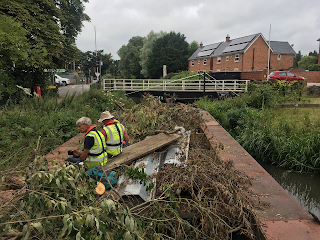 Of course, Chestnut Lane bridge wanted to add to the fun. 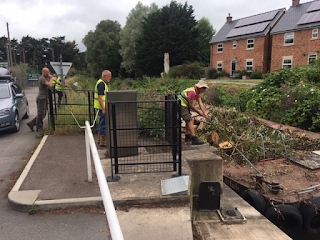 But she cooperated after Reg told her who was boss.

Finally, and with a very grateful crew, Delilah arrived at the fallen tree. 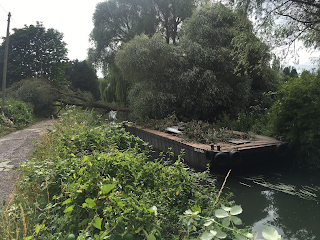 There she's moored awaiting (hopefully) unloading and (perhaps) being used as a work platform for the team who will remove the fallen tree. Her trip through Dudbridge and arrival at Harper's Field will have to wait.