Ham mill July 1st to 3rd
by: Andy P.
Bob arrived at the crack of dawn to put the pump on as there is a lot of water to move, so the cut piles can be exposed. Water drops about 1 brick per hour.
Andy P, Maurice, Mathew, Jason and Kay made up the rest of the crew.
The landing stage crew had inserted more piles but the last one was stuck on the remains of the old wall. A breaker was hired to help break this up but was still way under water. Frank and Colin arrived with it, along with fuels and left with the last long piles for Harpers field. 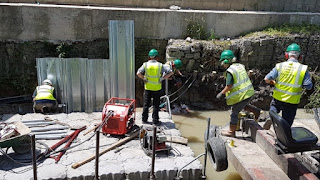 Jason on the clam shell helped to remove the broken bricks. 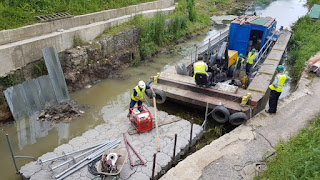 A pleasant lunch, sat on the landing stage, eating 2 birthday boys cake and the odd banana. 3 more piles were cut off and wall breaking continued all afternoon. Waders being the kit of choice.

The Tuesday Landing stage crew tried to continue to insert the sheet piles but the wall won.  So the piles were added further along the bank and were inserted to the height of the bottom of the gabions.


On Wednesday, Bob arrived early, for the now ritual long pumping day as Andy P, Mathew and Duncan joined soon after.
What a pretty site in the early sun. A neat sheet pile row 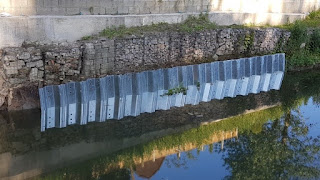 As we had numbers we started the screw piling, with great trepidation as this is a difficult, awkward, heavy, cumbersome job whilst floating on a plastic pig. Whilst it was still all of the above, it was easier than last time we did it, or the memory has faded.  At 4 metres it would go in no more but was still a few inches short, so several reversings and they went below the sheet pile.  2 more were completed before a well earned landing stage lunch, watching lots of blue damselflies doing what they do at this time of year. 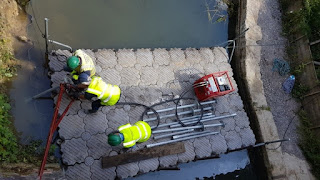 As the water was now 6 bricks lower, we continued wall breaking, mostly underwater which hopefully, will allow the missing link to be filled on Thursday. 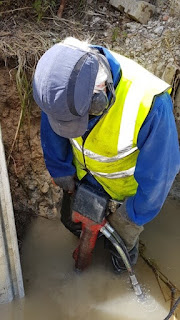 Duncan spent a lot time tidying the yard, building retaining walls and gathering stones together for removal off site.


Roy and Maurice arrived to take the very clean breaker back to the hire shop.


More sheet piles were- cut and the next batch of 12 made ready for the landing stage crew on Thursday. We’re getting there. 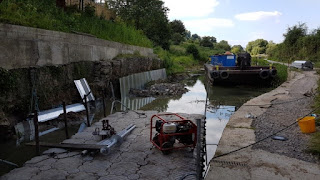