A number of leaks from the canal into the river have been identified and the plan was to dig out the towpath behind the coping stones to a sufficient depth to identify the leaks and to back fill with clay.  Early Monday morning 13 tonnes of finest Oxford blue clay was delivered, with the truck carefully reversing down Ham Mill lane and along the track to the gate by Jubilee Bridge. 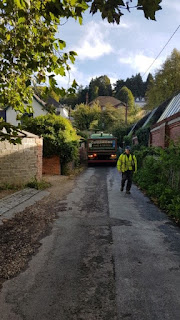 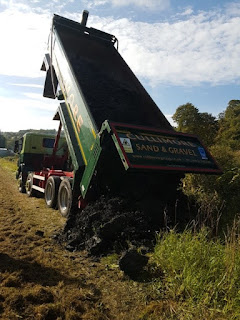 The crew of Bob, Mathew, Maurice, Jason, Kay and Andy P set about closing and diverting the towpath and when the mini digger arrived, the first explorations were made. It was not long before the first leak appeared or rather a gushing flow that created another Bob Ambury canal extension. 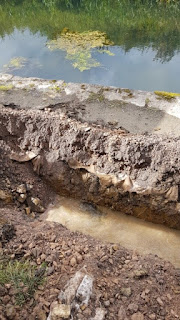 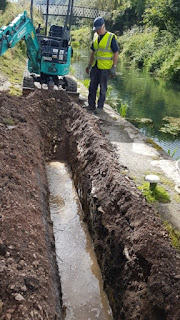 The trench was back filled and the clay and pushed down with the digger to seal the leak. We tried wheelbarrows but soon reverted to dumper loads as flow number 2 appeared along with a large void under the old gas main. We may have found the main route to the river. 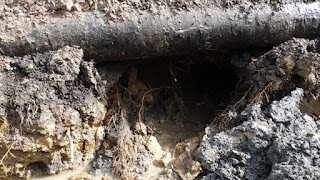 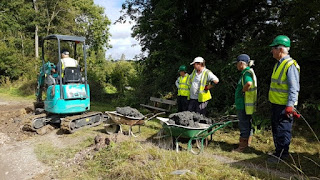 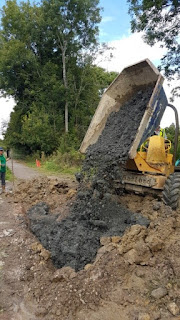 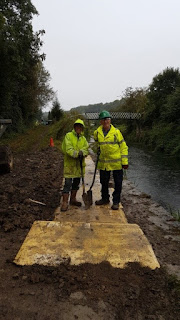 Work continued in rainy weather as the trench was filled and covered with trench plates-it was a very muddy mess by now.


On Weds Bob, Mathew and Andy P continued digging and back filling.  Several more large holes were found and then a whole length of wall was leaking back into the trench.  As we back filled we could see the water being forced back through the wall. We continued until the marker post about 28m in total.  It was noticed that Griffin Mill spill weir was now flowing and no obvious signs of water into the river we've seen.


All the clay was used and we apologise to the tow path users but its a bit messy at the moment.  However we are sure Jon P. and his team will work their magic to repair the towpath.
Posted by Peter Asquith at 08:14