A quick summary of the last few weeks work.


The block work on top of the concrete beam was built. The facing bricks were laid and pointed and the wall capped. 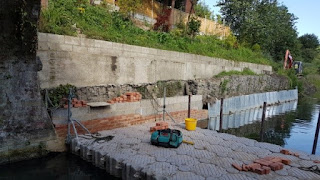 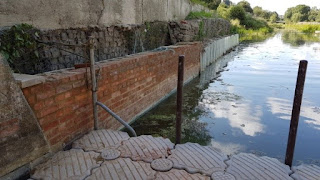 Western depot folks Mike L, Dave P and Maurice, supplied cement, slabs, bricks and then more bricks to keep us all going.   We set a new world record of 11 cups of tea made in 1 sitting.


Working from the plastic pig was interesting as you could lay mortar without you actually moving as the PP moved back and forth.


Heritage rubble was put behind the wall for drainage.


Surplus soil taken to the other side.


The other side new track was levelled for a possible mooring site.


The 2 dams and bog mats were removed and the BD is ready for a service and a change of career.


We even found time to weed, seed and plant some more bank plants.


The canal to river overflow was blocked off and the reluctant pipe was removed leaving a section under the tow path.


Even Samson left us but did struggle on its way. 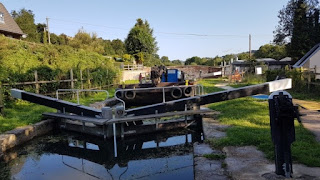 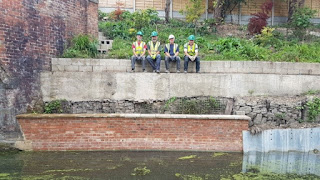 Although there are only 4 in this photo, Andy, Duncan, Leader Bob and Mathew, I wish I could add in the other Ham Millers, Monday - Maurice, Richard, Jason and Kay who have all toiled, sweated, sworn regularly, heaved all sorts of things into all sorts of places over a number of years.  In fact I am told we first appeared at Ham Mill in 2013 so perhaps this merits a more detailed what has Ham Mill ever done for us story.
Yard cleared in the time available and things taken to Brimscombe.  Fence posts hammered in for Dave S.
The neighbours gave us big goodbye hugs. We will miss each other. Even Dino the big fearsome dog looked sad.
2 records were set as super delighted neighbour Wendy was the first non CCT person through the lock and Bob and Wendy’s boat was the first non CCT boat through the lock as they went to rescue the plastic pig which some idiots had untied and was down at Griffins lock. A thorough soaking being their reward. 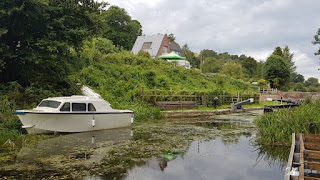 We did manage to have a goodbye and thank you sandwich at the Brewery before we went to Chestnut lane bridge bird surveying-yes the things we volunteer for.


So, unbelievable as it seems our work is done.  Hopefully the team and its spirit, friendship and camaraderie can be maintained.  Along with cake, nice weather, timely plans we stick to and some easier jobs-Mmmm.  Maybe not.