First of all thanks to those who helped at the Volunteer Taster day last Thursday. We managed to bring along both tugs and a hopper. There’s already been a good report on the event on this blog, so I won’t dwell.

I wasn’t around on Monday, but let me see what snippets I’ve been sent.  Seems that when the cat’s away.  With Patricia out of action the Boat Team has been taking full advantage of the idle hoppers, moving then up and down the canal in every conceivable configuration.

Tony reports ‘A long day today. Chris and I took the empty ‘Warp ‘with ‘Goliath’ and the  Davids with ‘Margaret’ took the part loaded ‘Weft’ down through the locks and  to the ‘Ocean.  ‘Margaret’ was pushing but we breasted up ‘Goliath’ just out of devilment to see how it went.  In fact we only got the tug stuck on rubble on the  outside in the approach to Ryeford swing bridge.  The Davids ploughed along way ahead of us and had a leisurely lunch at the Ocean before we arrived! On the return trip we breasted up the hoppers together and towed ahead on a bridle with ‘Goliath’, a technique we haven't tried for some time.  ‘Margaret assisted in pushing ‘Weft’ and we made excellent progress back to the locks with everything under perfect control.

Definitely a very effective procedure given clear communication between the pulling and pushing elements, our hand signal system definitely comes into  its  own in such situations.’ 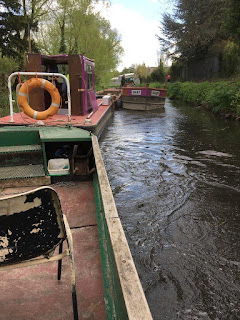 I believe Monday saw the return of Wookey's engine after its first 20 hour service.

Tuesday saw Goliath out training.  From not having any trainees (we passed them all), we now have two.  We look forward to Chris and Steve’s adventures.

Wednesday and Margaret, Wookey and Weedie were out.  Chris was apparently quite miffed because he got well and truly stuck in the mud.  Don’t worry, it won’t be the last time.  It’s good that we keep as many boats as possible traveling as far as possible.  It’s so important to help keep the channel open. 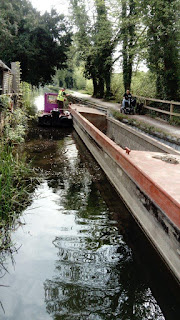 I’m away now of the next two weeks.  I hope someone has a go at sending a blog in.  Many people follow our exploits with interest.