The Western Depot team lead by Dave C with support from dry dredging continued to make good progress in Harpers field with the first services trench reaching the bottom of the field near the current landing stage. 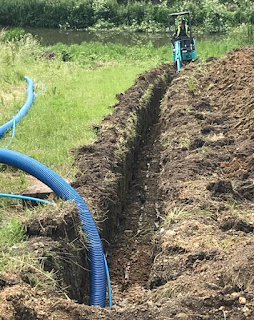 By the time we finished on Monday the water pipe and blue duct had been installed, and the first manhole fitted so that water and services can be provided for the current and planned moorings along the canal.  While the mini digger was working on this the rest of the team decided to check out the water supply at the top of the field and having eventually found the right manhole cover turned on the tap, with the result than no water came out of the end of the pipe near the original horse trough!  After some headscratching and hand excavation we managed to find the end of a working waterpipe plus a cut off section of the original plastic pipe and several sections of older steel piping. 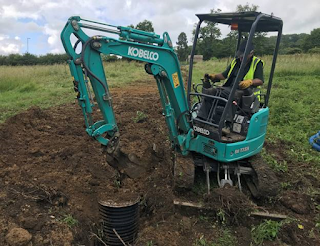 Work continued on Wednesday with a second manhole being installed at the top of the field, and the original & new piping being connected up – we then managed to prove that we had water at the bottom of the field but so far not at the pressure or flow rate that we had expected;  – the investigation continues! 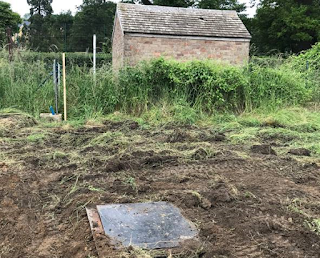 The team also managed to measure up some of the key dimensions in the field, and prepare an updated sketch – when completed the plan is to have 9 moorings (5 in the CCT part of the field, the others closer to Horsetrough Roundabout) plus a concreted dock (yellow in the sketch below)  for unloading dredged material which will be allowed to dry out in the field before being moved off site for disposal. 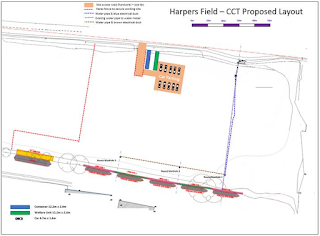 Work will continue this week on the services trench along the bottom of the field while we continue to investigate getting an electrical supply into the field, the design scheme and planning approval for the concrete dock and better water pressure and flow rates.
Posted by Peter Asquith at 21:46