Tall Ships on the Canal

Being tall ship as well as a canal enthusiasts, my son and I went to the Gloucester Tall Ships festival to enjoy this popular event. We got to talking to the skipper of the brigantine La Malouine of about 33 metres. He invited us to make the trip from Gloucester to Liverpool, the next leg of their trip. I was particularly keen to experience the ship canal from a traditional vessel. 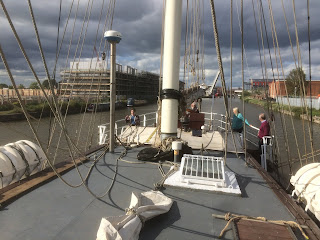 We left Gloucester Docks Monday evening as soon as the harbour was clear of wakeboard jumps and zip wire. Recent dredging doesn't seem to have been quite as thorough as it might have been (Andrew Rendell you are needed!) so we had to do a bit of pushing and pulling to get her off the quay. It was quite a sight as we were joined by other tall ships, Grayhound, Brian Boru and Vilma and paraded down the Gloucester Sharpness canal in late afternoon sunshine. 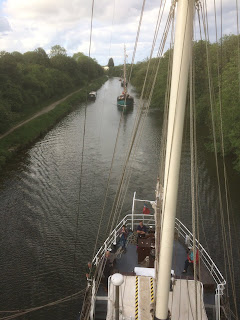 We were cheered on at each bridge and along the towpath by enthusiastic onlookers as the skipper brought us skillfully through each bridge hole. Some towpath users where clearly not expecting this group of historic vessels and got quite excited! The only incident was the unfortunate demise of one of the striped wooden guide poles on one the swing bridges which succumbed to being snapped off by our main yard brace. It ended up on deck as a souvenir!

Climbing to the crosstrees and looking out over the beautiful Severn vale in the early spring light was a treat not to be missed. Passing through the junction at Saul, I shared the story of our efforts to restore the Stroud canals with my shipmates and they are looking forward to its completion. 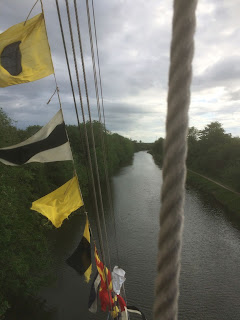 The evening (and our canal journey) ended with the four ships gathered in the tidal lock at Sharpness waiting for tide and pilot early the next morning. We felt we had participated in a bit of canal history, following in the wake of so many tall ships of old...