It's been a busy period for Weedie (or Aqua Flora to give her botanical name). A short window of opportunity opened up to get her above Dudbridge lower before rectification work on the lock begins and to remove as much of the weed that has grown quickly in the warm sunshine from the pounds above.  Myron Burak joined me last Wednesday to move her from her usual mooring at Boakes Drive, up to Dudbridge, cutting as we went.  Thanks to Western depot for meeting us at Langley's field with the fuel bowser to top us up. 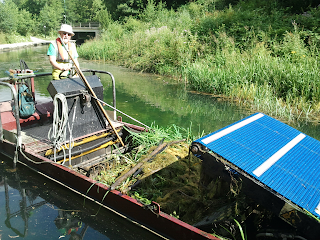 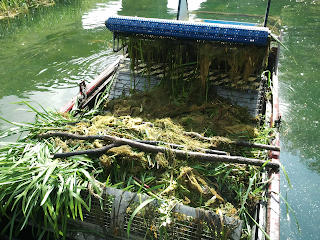 Plans for taking her further from Dudbridge, were put on hold, as the amount of weed that met us meant that three loads removed barely scratched the surface. On Saturday, Nick Carter, fresh back from his hols, did the hard work to help move Weedie up to Wallbridge, taking advantage of the reduced traffic on the bridges at Strachan's Close and Longford Mill.  On Monday it was Richard Farrer who made up the crew, negotiating our way pass Delilah which was being used by tree-fellers (though there looked to be more).  We then cut up as far as Bowbridge, removing a few traffic cones on the way. Several more loads were removed and will hopefully make navigation a bit easier for a while.  Next step is on up to Griffin Mill but that's for another day.