You know you get one of those days when lots of things are planned and all are interdependent on each other to work. The Workboat Team had one of those today. Six boats all in close proximity and a lockside meeting. Also Weedie and a team from WD arranging removal of a pile of vegetation from the fish pass. What could possibly go wrong. Well er, actually nothing. It all went absolutely to plan.

Phase 1 was for some of us to meet at Delilah moored just below the gas main and bow haul it down through Dudbridge Lower. We were joined by Laurence, our H&S Director, coming out to help at the sharp end. Malcolm and David L. had brought up Margaret for later and also helped. Good, that’s what you need for bow hauling, lots of people. The first obstacle was expected to be the silt bank just above Foundry Lock, but it sailed over that and into the lock.  Ian from the council was already preparing the lock, so we were quickly into Dudbridge Lower.

Phase 2 was a vitally important meeting to decide how the Dredgers might remove the silt from the chamber of Dudbridge Lower. John S and Jon P were due to meet us lockside for this.  Bound to have to wait for them to turn up.  Nope, both arrived within 2 minutes of each other.  I’m glad to say that some very thorny operational and safety considerations were ironed out and a plan developed. 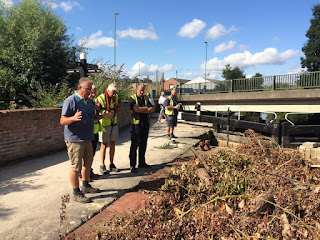 Phase 3.  Meanwhile Patricia had been carrying on dredging below the lock and just managed to fill the hopper as Delilah was ready to come out the lock.  Margaret grabbed the hopper and disappeared off to Langley’s field.  With those out of the way Delilah was gently and oh so skilfully manoeuvred out of the lock and passed a now moored Patricia. Alex and Brad now assisting.  It was moored at Wiggal’s Yard and swapped for an empty hopper that we just happened to have handy.  This was brought back to Patricia and the lads carried on dredging with hardly a pause. 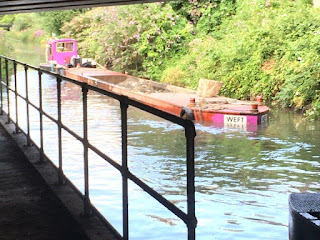 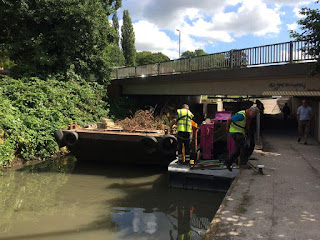 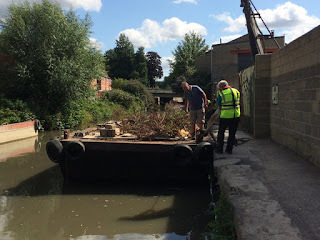 Phase 4. Time to check out what else was happening in the flotilla. What was Weedie up to. As planned it was being used by Nick and John F to ferry out a load of vegetation from the fish pass and use its unique abilities to dispose of it. Buffers idea and it worked a treat. Dave and I joined him and Geoff in the fish pass, filling bins to pass to the Weedie team to load into the boat.  Hold on!  First bow hauling, now shovelling rubbish, hasn’t anyone told them I’m supposed to be management.  However, with six of us now the job and mechanisation to help, we soon broke the back of it.  We left after letting the Weedie crew know that they needed to be at Dudbridge Lower by 2:30 for passage or Weedie would be stuck in the upper reaches forever. 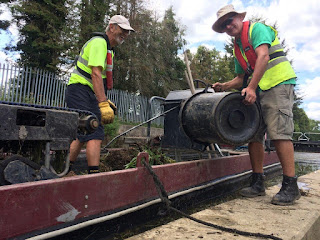 Phase 5. Passed Patricia digging away and back to the abandoned Delilah, where Dave and I met up with Margaret and crew to take Delilah to Harper’s Field.  A thoroughly pleasant trip, made particularly interesting by being joined at the locks by a Belgian family on holiday. They were totally fascinated by the whole process and of course, their offers to help were gratefully received on such a hot day. There were plenty of us to keep eye on them. Stroudwater Canal, international tourist destination of choice.  Four lock movements later we continued our idyllic journey. 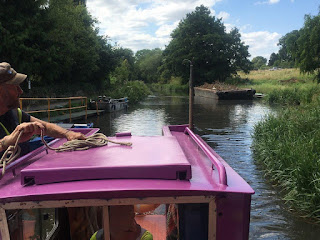 Phase 6. Delilah was deposited at Harper’s Field and then an every bit as lovely a return journey to return Margaret to her mooring at Ebley.  Time to check on Weedie, had she made it before the deadline. Yes, she’s now moored at Ebley, to be taken down to her home mooring at Boakes Drive on Wednesday. Margaret arrived bang on 4:00, which was when Dave and I needed to be there so we could get to the Ops and Dredger meeting at Brimscombe. Perfect!

That was my day, How was yours?