A few odd jobs, whilst we wait to refloat the boat.  The 'jazzy' red & white transit device has now been completed.  Here it is at the point of fitting ready to go into transit mode. 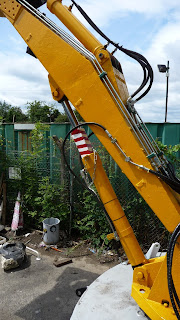 Easily reached from the deck with the boom raised, it can be placed around the main ram. 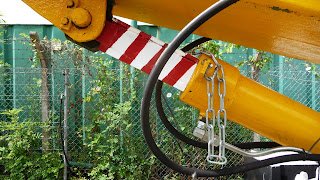 Once the boom has been lowered, it becomes captive and sets the boom in a rest position where the top point is roughly in line with the cab roof.  We have fitted a chain, which can be dropped over a hook so that, should the assembly get accidentally dropped, so it will not sink to bottom of the canal.  When not in use, the spacer can be stored away in a safe place.

The interior of the engine bay has had a few upgrades.  The side walls have received a fresh coat of white paint.  The floor has been extended under the cab so that the tool box is easily withdrawn and accessed, and an engine radiator air flow diverter has been made to send the hot air up out of the engine cover and not under the cab.  However, in winter, the warm air under the cab may be most welcome. 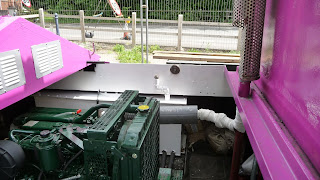 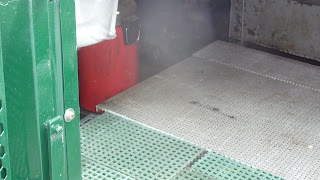 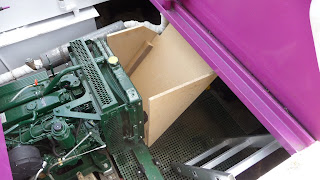 There is a little bit more to do to secure the air diverter effectively and then check operation with the engine running..

...and finally, to prevent damage to the engine cover when it is closed, we have fitted a couple of plastic door stops, one each side. 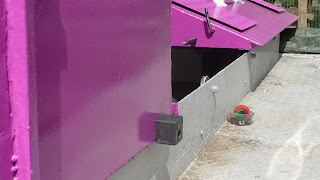 A start was also made on a site clearance.  Much detritus has accumulated during the refit.
Posted by Peter Asquith at 16:59