Following a sampling session some time ago between Pike Lock and the Ocean, there has been a requirement to do some additional sampling around the area of the old Hoffmann extraction point just west of the railway bridge.

This testing will be taking place in two days time, so today, we set about getting work boat Jasper up there to assist with the work

Jasper was residing down at Pike Lock, so the covers were removed, the outboard attached and then the leisurely journey towards Bonds Mill. 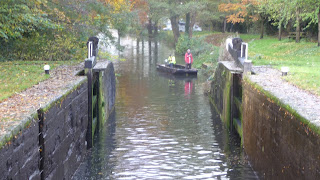 Blunder Lock was no problem, despite the fairly leaky top gates, however, Newtown Lock proved a bit trickier in that the towpath gate sill seal was not good and the lock would not fill up enough to open the top gates.

We drained the lock and did some poking around along the sill line.  A large piece of bedding was removed, but nothing else seemed to be in the way.  The water is very deep and difficult to feel exactly what was going on.

Anyway, 'take two' was more successful, with less water surging from the foot of the gate.  The lock filled and we were able to pass through. 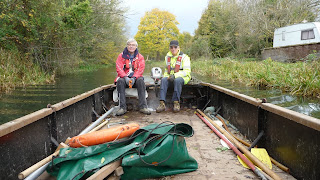 With the recent heavy rains, the canal level is quite high at the moment, so much so, that Jasper was not going to go under the non-lift lift bridge without some weighting down.  After some debate, the best option chosen was to remove the contents, pump in a sufficient water to 'sink' it to a level where by it would slide under. 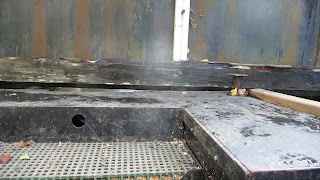 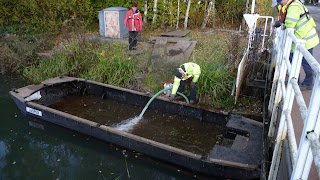 This all worked very well and the passage was quite simple.  Just a matter of pumping out the water the other side, oh, and cleaning out the detritus that had collected under the boards. 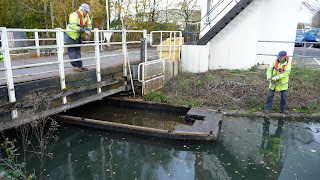 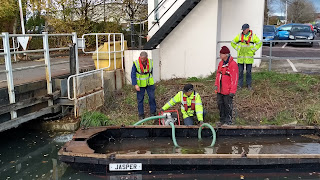 Wednesday, the sampling should take place and then we can reverse the procedure for the return journey.
Posted by Peter Asquith at 17:11