Ocean to Bond's Mill Silt Testing
by: Peter A.

With Jasper moored up at the east side of Bond's Mill lift bridge, it was just a case of removing the canopy and loading in the kit needed for the sampling task.  The weather was perfect, although a complaint about the temperature of the water was later recorded.

Seven samples were scheduled to be taken either side of the Hoffmann extraction pipe, which is completely overgrown.  The outboard is quite able to push Jasper, but not drive it through the weeds at the constriction, here it was a case of man the poles and ropes and push hard.  Passage was achieved. 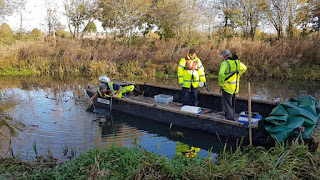 Each sample was taken at 10m intervals, spaced either side of a previous measurement point.  As mentioned on Monday, the original sample recorded some contamination. 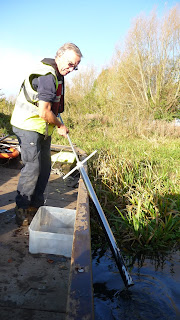 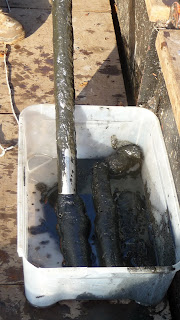 Suffice to say that there was a distinct smell of machine oil on some samples, together with a thin film on the surface of the water.  Quite what when on with this pipe line during the war years is presently a mystery.  The results of the detailed analysis eagerly awaited. 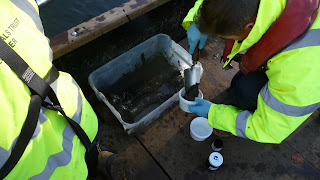 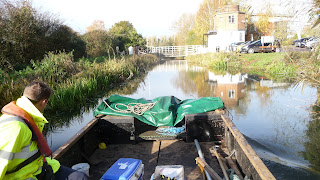 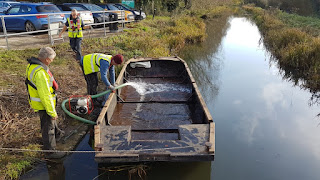 Having developed the procedure for getting Jasper under the lift bridge on Monday, we quickly set to with the pumps and floated him under the bridge.  The Autumn run back through Newtown & Blunder Locks to the slipway at Pike Lock was delightful, made even more so by a Kingfisher following us down.
Posted by Peter Asquith at 21:29