Well, what promised an exciting, if challenging day, lived up to expectations.  An early start at Western Depot, with the Ellis crane due to arrive at 8:00. Alex, Brad and John from the dredging team were already there preparing the site for the lift.  Fencing removed, gates opened, and a general tidy up. All the dots joined up! 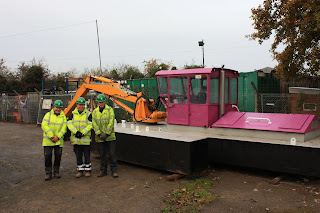 Spot on 8 the crane and support vehicles arrived.  A successful lift and some very careful positioning of the two ballast tanks and dredger onto the waiting lorry, and Augustus Gloop was on his way by just after 9:00  Once at Wiggals yard the process was reversed.  First the ballast tanks were taken off the lorry and placed on the ground, awaiting Gloop. 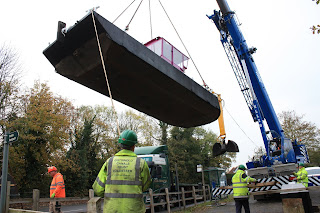 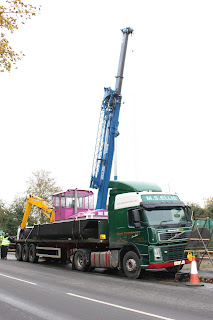 The dredger was then lifted off the lorry and placed between the tanks, which were then secured into position.  Then the big moment.  The final lift.  Dredger complete with tanks was lifted from the yard, over the wall and into the canal.  No, it didn't sink!  To much relief. 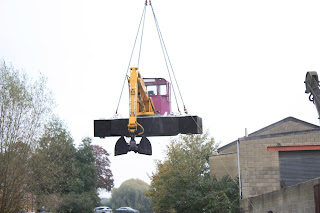 Despite light rain there were several onlookers of all ages, all of who appeared to be very impressed by the whole operation.  Once in the water, Augustus Gloop took his first 'dredge' since he came out of the water last November.  One nice 'gloopy' full bucket full of silt! 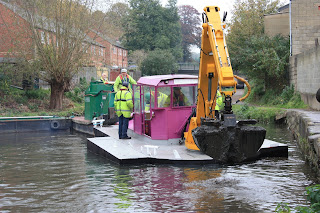 Then tug boat Goliath arrived, crewed by Myron, Jerry & Tony and was quickly coupled up Gloop then gently driven over to Ebley West landing stage, for temporary berthing.  All ready for commissioning to be started next week.

A big thank you to the 'deployment team' of Alex Hannam, Brad Herringshaw, and Myron Burak, Tony Jones, Jerry Ceasar and John Ferris for providing support. Also a magnificent effort from Ellis's, for cranage and transportation.  All went seamlessly and more importantly, safely.


The second transport arrived shortly after mid day with x2 hoppers. Bob Hallam/Peter Asquith can probably supply words here, as we were with Gloop at Ebley when the arrived.

Now to get down to some serious digging.